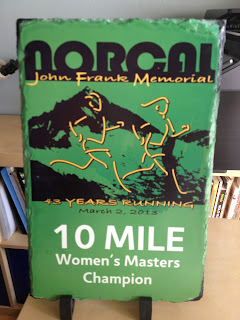 On Saturday, I ran the NorCal John Frank Memorial 10 mile Race. I have run this one before, but it had been about 5 years. I knew the course was a monster, but that's what I was looking for.

This race was a last minute add or rather substitute for a 12k I was planning to do in March. My goals were to have fun, practice racing (suffering) and win the Masters' race. The piece of rock in the photo proves that I accomplished the 3rd goal. I had fun mostly because I had the good fortune to travel with three of my friends (and teammates) to the race.  It's about a five hour round trip, so we had lots of time to catch up and entertain each other. Also, the event is very well organized and they really take care of the runners.

As for the suffering, I did that by running the race pretty hot on the way out and not so hot on the way back. The course is (sort of) an out and back with some pretty good hills in the middle and at the end. I didn't have a goal time, but I did want to put in a good hard effort. The trouble with pacing on this course is that it is both winding and hilly, so you never really get a chance to find a rhythm.

I started off running an honest pace of just over 6:00/mile. When I hit the hills in the first 5 miles, I did not slow down at all. I paid for that later. There were few if any mile markers, so I don't have many splits to show, but I did look down at my watch at the 5 mile marker to see 30:30 or so.  I knew when I saw that split I was going to struggle the second half. I slowed considerably on the hills on the way back, seeing 6:40-7:00 pace as I slogged my way up. I did get a nice rhythm going again from mile 8-9.5 and then climbed the last hill to finish 4th woman, in 1:02:27. I'm not sure whether I would have run much faster had I taken the first half a little easier, but I bet the second half would have felt better!

I was actually happy that I ran the race the way I did. One thing that's been missing from my running lately is practice suffering. There's no better way to practice that then to push yourself at the end of a hard race. It feels wonderful to be strong at the end of a race, but I found that it also feels good to win the mental battle of hanging in there when the last part of a race hurts. I had never realized that before or maybe my attitude has changed. I don't want to do that every race, but I think right now I needed a chance to test myself and prove that I could stick with an effort even after it ceased to be comfortable.

I am really looking forward to the next race, another 10 miler, on my schedule for April 7th. It is a much faster course than the one I just ran. One of my teammates wanted to know how much of a handicap Saturday's course had compared to a flat, fast course. I am happy to be able to answer that question! I looked at race times for faster runners (sub 1:10, sample size ~15) who ran the NorCal 10 miler last year and then the SacTown 10 miler four weeks later and eyeballed how much faster they ran on average (nobody ran faster at NorCal). Some people were only a minute faster while others were 3 and 4 minutes faster. It seemed like the average was around 1:30-2 minutes. So, there you go, Christina.

I have four more weeks of training before this next race and a much faster course to look forward to. My hope is to PR at SacTown which means running around 1:00:30. After this race last weekend, I feel much more confident that my fitness and mental racing toughness will get me there.

Another thing that didn't help me in the race Saturday was that I ran a quality workout on Wednesday night. I wish I could have done it on Tuesday, but I needed an extra day of recovery from my 21 miler the Sunday before. That's another thing that will change for the SacTown race: I will have four days of easy running before it, instead of two. That taper will help a lot!

As for the rest of the stuff I've been up to, I present you with my training log for the last two weeks. 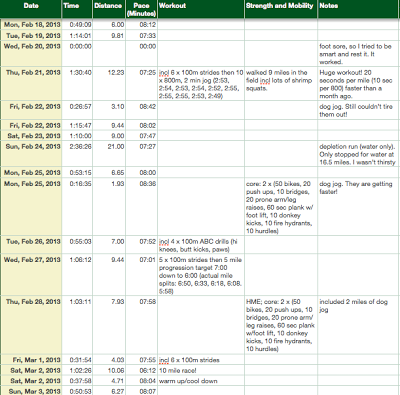