I am pleased to announce that I am now part of a very cool project called the 2016 Marathon Trials Project. This project is the passion of Mark Hadley, a coach whose website I've been lurking around for a few months now. I have been intrigued by his training philosophy and inspired by the success of the athletes he coaches. I am looking forward to getting started with Coach Hadley and watching his project grow.

One of the main reasons I joined was to be part of something bigger than just me trying to qualify for the Olympic Marathon Trials. I found the stories of other Trials qualifiers very inspiring as they came out in the media last year. I felt like I was connected to this larger group of athletes. I can only imagine how exciting it will be to be part of a project dedicated to getting as many runners to the Trials for 2016 as possible.

With 2:43 as the new B standard, I have my work cut out for me, but I do have a few years to work at this. I am excited to get back to training again and can't wait to share my journey with all of you!
Posted by Jaymee at 11:33 AM 3 comments:

I've had that chant in my head for 24 years. It's what I think about when I feel like quitting. I went through Army Airborne in 1988 because I wanted the life experience of jumping out of airplanes. Nobody made me do it. It was considered a privilege for an Air Force cadet to get to participate in this training.

The first weekend of Airborne training is meant to separate the wheat from the chaff. Our company had a 30% wash out rate that first weekend. They put us through intense physical and mental exercises to test our will and force the weak to quit. And, that was just over the weekend. By Monday, when training actually started, they gathered those of us left in the main yard and broadcast over the loud speaker that they understood that we had been through a lot over the weekend. It was understandable if some of us wanted to quit. They had donuts, milk, and cookies up front that they would give to those of us who decided we couldn't take it and wanted to go home. They ate the donuts and drank the milk while we salivated.

A few poor sons of bitches actually took the bait and walked up to the front to get their milk and cookies. Of course, once they got there, they were made into fools.  We were all told that it was our mission to ensure that these jackasses got through the next three weeks of training without quitting.

This past Sunday, starting at around mile 6 in the California International Marathon, I wanted my milk and cookies, and I definitely wanted to go home.

I reported on the weather forecast in my last post. The weather forecasters were wrong--it was worse than predicted when we arrived at the starting line. All I recall is seeing some guy in a garbage bag being blown sideways when we drove to the runner drop off point.  I was barely able to move forward in the wind while being pelted with rain as we walked toward the starting line.

Once I was safe inside the elite tent, I was absolutely drenched, but temporarily sheltered from the weather. Then, I found a force that I would unfortunately let affect my race in a much more insidious way. She seemed pleasant enough as we chatted away before the race. She asked if we could run together and I agreed thinking we would start together and then find our own rhythms. After mile 2, when she told me that she didn't have a watch or GPS and needed me to give her our splits, I realized she wasn't going to run her own race. I can't really explain why this affected me like it did, but having someone ask every 1/2 mile or so what our pace was when gale force winds were blowing us all over the road just pissed me off.

I told her at the start of the race I didn't know what time I was shooting for--that time seemed irrelevant on a day like this--so I was baffled by her constant need for pace information. I could hear her sigh when I told her our pace was 6:45 or 6:50 when we turned into the wind after mile 6. We were drafting off of some big guys, but the gusts were even slowing them to what seemed like a crawl. Still, "how fast are we going now?" came after every mile marker. I finally told her I was no longer keeping track of our pace. I wasn't lying. I really didn't give a shit what pace we were going into these winds. I just wanted to make another turn out of this stuff. The fact of the matter was that my legs were cramping as we ascended every hill. I didn't understand why this was happening so early in the race, but it was. I was having a tough enough time staying focused on getting to the next mile marker let alone babysitting someone who forgot their watch or decided not to wear one.

The crampy legs and mile by mile audible reminder of just how slow we were going had me thinking about milk and cookies very early in this race. I told myself I should try to at least get to mile 10: Old Fair Oaks. I could drop there. I got through the town and decided I could probably make it to the half marathon point. There was a nice Safeway to seek shelter inside. I passed that and kept going. I realized that my friend had stopped asking me what our splits were. She must have dropped back. This lifted my spirits a bit but not a lot.

My next target, and this was going to be the real stopping point, was mile 19 at Watt Ave. I live about a mile from there. I could just run home and get a nice cup of hot coffee and see my dogs. That pleasant vision danced through my mind as I slogged through the middle miles of this race.
Mile 17.
18.
There's 19.
God damn it!
I see people I know.
And they're cheering for me.
I can't quit in front of them.
Maybe I'll stop at mile 20.

By this time, I was laughing at myself. I was in the flat part of the course and most of the cramping in my legs had ceased. The weather had ceased to be ridiculous too. I was being passed by a few runners, but I wasn't slowing much more. I didn't have anyone outside my body reminding me that this was a suckfest.

I knew what would happen if I took the milk and cookies. I wouldn't get to quit. Even if I stopped running, I would hate that I had quit and would beat myself up. Instead, I felt oddly excited about the prospect of sticking this bitch out. I was sort of proud of myself for hanging in there and wondered whether I would break 3 hours or not. I decided to give it a shot and see how I finished. I became more and more excited about finishing as I ran past 23 and 24 miles. Only two to go. I had one girl ahead of me as I headed into the final straightaway. I sprinted past her at the finish in just over 2:59.

This was an ugly damned race, but it was a life experience that I won't forget. I could choose to be ashamed of the weakness I showed, but instead I choose to be proud of forgoing the milk and cookies that were so tempting at mile 19 and seeing the race through to its end. My hard work was rewarded with a 3rd place masters finish, 2nd place age group and a second place finish amongst PAUSATF masters runners. This was worth some cash and a nice plaque.
Finally, this whole experience--the half-assed, 3-4 months of training, the less than fully committed nature of my race preparation, the weakness in the race--reignited my fire and made me realize that I want to run fast again. The gauntlet of a faster Olympic Trials qualifying standard for 2016 has been thrown, and I will be aiming to see if I can get there.

I am already planning my next races, to be revealed after Christmas. In the mean time, this week is all about indulgence--milk, cookies, wine, pizza... Whatever the hell I want. 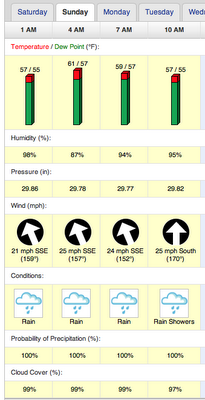 Sooner or later every marathon has bad weather. Runners of the California International Marathon (CIM) have been extremely lucky for the last 7-8 years in that weather conditions have been pretty close to ideal for running a marathon. 2012, on the other hand, will be one of those touchstone years that runners will use to describe how miserable conditions can be.

I am running CIM. I have been training for it and never had a doubt that I would run it, even as the available weather forecasts began converging on the same, bleak weather story for Sunday morning. My goals for this marathon have had less to do with the actual race or how fast I might run and more to do with getting back to training and gaining some base fitness.

I have done my best to get in the training but tomorrow will be more about sheer will than about training. I will be on the lookout for a burly guy (or gal) running between 2:50-2:55. I will tuck in behind you and you'll never know I'm there. And, if you want to tuck in behind me, be my guest.