Seattle Rock n' Roll Half Marathon: Not so secret

Yesterday, I ran the Seattle Rock n’ Roll Half Marathon.  I had not planned to run a half marathon this weekend, but I needed to be in the area for my sister’s bridal shower.  I had told her I was not coming to the shower two weeks ago, teeing up the perfect opportunity to surprise her.  I only realized that the Seattle R-n-R Half was the same day as her shower about a week ago.  So, I obtained elite status from the race organizers on Wednesday, bought a plane ticket on Thursday and jumped in the race on Saturday.

I didn’t change my training at all this week in prep for the race aside from knocking a couple of miles off of my run Friday morning and doing away with a few minutes at goal marathon pace at the end of Thursday’s 10 mile run.  So, I will complete 75 miles this week instead of my planned 80 miles.  Needless to say, I wasn’t exactly fresh going into the race so I didn’t have particularly high performance expectations.  I had also been feeling pretty tired and low energy all week for some unknown reason.  I finger allergies as a culprit along with chronic dehydration despite my best attempts to drink gallons of water.  I generally find the first few weeks of heat training make me feel this way, and I had been running in 80+ degree weather for most of my runs this week.

I tried desperately to keep my secret from my sister about coming to her shower.  Well, maybe I didn’t try that hard.  I hesitated to put any mention of it in my blog, but I decided it was safe since she doesn’t read my blog.  I certainly steered clear of posting anything on Facebook until race morning when I thought she’d be too preoccupied with plans for the day to check anyone’s status.

As it turns out, my Mom initially tipped her off by being a bad liar.  My sister did not buy the stories she invented about why she couldn’t go out Friday night and about where she was when my sister tried to call her Saturday morning.  She became even more suspicious when she looked at my Facebook status and saw that someone from Sacramento asked how the weather was in response to a post I made about VIP tent heaven.  That’s when she started checking around for more information and finally, after the race, pulled up my race results.  Nice detective work, Jill.

My Mom and I showed up at the shower to “surprise” her, and she greeted me at the door with a print out of my race results telling me that I’m not surprising anyone.  Damn. 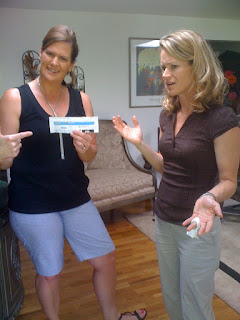 Now, for the race report…

I would like to start by saying how well the race organizers treated the elite athletes.  I have limited experience in this class, but the stark contrast between being an elite in Serbia and being an elite in Seattle were absolutely glaring and pretty humorous.  I was put up in a great room at the Embassy Suites and roomed with another elite masters female running the full marathon.  The rooms were amazingly spacious and had an entirely separate kitchen and living area from the actual bedroom.  I had everything I needed to make breakfast, mix up a nightcap or wash my clothes right there at my fingertips!

By the time I arrived, I had missed the complimentary dinner sponsored by the race for the elite athletes, so I popped down to the hospitality suite to get my race number and instructions for the next morning.  Because I was so late in entering, I had no time to obsess over the course features though I knew it was going to be hilly.  This was Seattle after all.  Normally, I would look at the course profile, identify where the water stops were and mentally get myself ready.  I had no time for that.

I started a new pre-race dinner tradition before Shriner’s going out for sushi the night before.  This may seem like a risky pre-race meal idea, but I came up with it after seeing just how many carbs are in a sushi roll, something like 141 grams.  There is a lot of protein as well, but it’s hard to find that many carbs in even a pasta meal.  So, I drug my Mom to sushi Friday night at a great restaurant in Tukwila and downed a beer for the extra carbolicious benefits.

I finally got to sleep at around 11:00 p.m. after getting all of my racing gear together.  The wake up call came at 3:45 a.m.  Ouch.  It turned out I roomed with someone that only needs 5 hours of sleep.  We were, however, asked to meet down in the hospitality room between 4:00 and 4:45 because the buses were leaving at 4:45 for the start, so that made 3:45 seem somewhat reasonable.  I had oatmeal in the room and a banana before heading down.  I swear I heard angels singing as I went through the doorway of the elite athlete hospitality room.  I was stunned by the plethora of food items available to us for breakfast.  There was cereal, fresh fruit, HOT WATER!, honey, peanut butter, bagels, juice, and on and on.  I wanted to eat a little bit of all of it just because I could.  I would not go into this race starved, that’s for sure!

All memories of the spread at the hospitality suite disappeared once I entered the land of milk and honey at the VIP area adjacent to the start.  Tables with white linen tablecloths were set up in regular intervals in front of a tent filled with baked goods, coffee, an assortment of teas, fruit, fruit juice, energy bars, cereals, Cytomax, etc.  As a centerpiece on each table was a glass vase filled with freshly cut flowers.  My roommate pointed out that the inside of the vase was lined with a banana leaf, giving the vase a lovely green hue.  Come on! A frickin’ banana leaf?  This was a class act right here.  We had our own honey buckets (the Northwest term for portable toilets) and a changing tent for both men and women.  Honestly, I didn’t want to leave this cozy little cove of delight to pound the streets of Seattle.  Then, they kicked me out of Eden.

I found it inspiring to toe the line with some of the best female masters marathon runners in the nation; Susan Loken, Amy Manson, and Christine Glockenmeier (my roommate).  I will face some of these women in October in Twin Cities.  From what I understand, the race start began in waves since the course had some seriously narrow spots that would not accommodate a large pack of runners.  So, with the gun, the elite contingent was off!

The first mile started off uphill gaining about 50-70 feet and my first mile split was 6:12.  I felt like I had gone out under control even though I probably could have taken it slower given that hill.  The next couple of miles rolled up and down through neighborhood streets thinly lined with cheering crowds.  I did remember that there would be a good hill around mile 5 and it lasted the entire mile gaining about 150-200 feet total.  That’s a good hill!  My pace slowed in that mile to 6:41.  The next mile had a good downhill run that brought my pace down to 5:58.  The next couple of miles rolled along Lake Washington and this was truly the best part of the run.  Aside from the beauty of this tree-lined section, I locked on to a pack of marathon dudes at this point and got to feed off of their energy and rhythm before dropping them after a mile or so.

The hills came again around miles 9 and 10 where we gained another 100-200 feet.  The most surreal part of the race had to be the tunnel.  This was the I-90 freeway underpass and it was dark, the air was stale, the band playing at the end of the tunnel was cacophonous due to the poor acoustics, and I felt just a wee bit claustrophobic.  The rest of the run continued on I-90 heading into the city, so not particularly scenic and with absolutely no crowds to cheer.  My GPS failed completely in the tunnel, so I have only unreliable split data after mile 9.  The 10 mile marker was inside the tunnel and was most definitely short since the clock there read 1:00:45 as I ran by.  I knew I wasn’t going that fast!

After exiting off of the freeway off ramp into the city, the crowds got wild and we continued down hill toward the finish at Qwest Stadium.  We encountered one of those screaming Seattle down hills in the last mile of the course that had me throwing on the Jake brakes and flailing my arms like crazy to keep from toppling over.  I was catching up to my nearest female competitor at the very end and could have caught her had we been running 13.25 miles.  I was happy to see a 1:22 on the clock as I approached the finish having no idea what my time would end up being at that point since I gave up on my Garmin after the tunnel.  I crossed the line and my Mom said they announced I was the first Masters female runner to finish.  The on-line results are actually messed up right now because they coded all of the elite runners as F-elite or M-elite rather than by age group and the woman listed as the first master ran a 1:27.

According to the race results, my splits at the following points were:

My overall time was 1:22:34.  I needed 18 miles for the day, but there wasn’t a convenient place to run a good cool down at the finish.  So, I put it off until later that night.  Little did I know, I was going to get smacked with a migraine right before my sister’s shower and have the post-migraine haze and body shakes set in after that.  Nonetheless, I set out at 7:30 p.m. to run my 4 miles and felt better after the run.

I am happy with how the race went given where I am in my marathon training and having not tapered.  It is a little daunting to think about how I am going to run that time and tack another 1:23:25 half marathon on to the end of that in October.  I keep telling myself that I have a lot of training ahead to prepare me for that.  I will be running the San Francisco Half Marathon next month and am excited to see how much faster I can run the distance once I’m a little further along in my marathon training and have a chance to taper.

I would recommend the Seattle Rock n’ Roll Half Marathon to anyone looking for a nice hilly course with the potential for good weather.  The weather for this race was absolutely ideal.  I think it was in the 50s at the start with clear skies, little to no wind, and maybe got into the 60s by the finish.  As any Seattleite will tell you, though, this is not *normal* weather for this time of year.  We got really lucky.

Congrats to everyone who completed the Seattle Rock n’ Roll marathon and half.  My hat's off to those brave souls (and soles) that spanked the Western States 100 miler course this weekend.  You rock!