I added another 90-mile week to the books today with the completion of 10 easy miles in 95 degree heat late this morning here in Sacramento. The Dissin' Genius and I were in Tacoma, WA for my sister's wedding all weekend and returned to the furnace that is Sacramento this morning on a 6:40 a.m. flight. As I loped along, the sun beating down on my back further emphasizing my racerback tan lines, I laughed about the complaints I and others had made about the heat this weekend in Tacoma.

The wedding was on Saturday at 5:30 p.m., and I had a double scheduled for that day: 16 in the morning plus 4 in the evening. I had planned to do the double Friday since I was worried about how I would fit the evening run in Saturday. This plan was a good one until Friday morning somehow got away from us, and we were staring a 10 a.m. start in the face. We thought it would be too hot to start a long run that late (funny in retrospect), so I stuck with the 10 miles I had on my schedule. I sent my coach a message asking if I could combine my two runs scheduled for Saturday into a 20 miler for convenience. 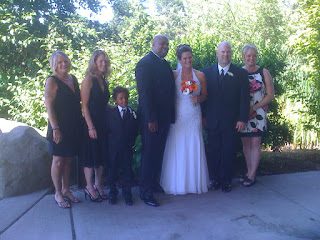 Friday was a beautiful day in the Northwest though slightly warm (upper 80s). We ran a 10-miler through downtown Tacoma and down to the waterfront along Ruston Way. The breeze really helped keep us cool, and the views of Mount Rainier were amazing on the return trip. I had tons of energy on this run and tore up the hills at the end.

When we got back from our run, I had a message from my coach putting the kibosh on my 20 miler idea. She pointed out that running three, quality 20+ milers in a row (last weekend, this weekend, next weekend) wasn't the smartest move because it was tough on the body. She suggested that I do the 16 miles in the morning and let the evening workout go. She reminded me that it’s better to go into a race undertrained than over trained. Given the fact that I was bordering on being over trained before Belgrade due to my schedule juggling and trying to fit too much in, I realized the folly in my suggestion. This is why I have a coach, and she is smart. The question was whether or not I could let that 4 miles go.

Our Saturday morning long run started under cooler conditions with cloudy skies, but quickly became warm as the clouds retreated. We decided to run the same route as Friday with a few more laps down on the waterfront. My run included 60 continuous minutes of quality: 5 x (6 minutes @ marathon effort + 5 minutes at half marathon effort + 1 minute @ 3k effort) with no rest between pace changes, finishing with 3 x 200m cut downs. I felt a little clunky during the warm up as we ran through downtown making our way south to the Chihully glass bridge and then heading north up Dock Street.

Once we got down to the waterfront, I ate a Roctane gel and took off on my pace work. I immediately realized that I should have run slower and taken it easier on the hills the day before. My legs were less than fresh, and I struggled for the first half of the workout. The sidewalk that I was running on was filled with pedestrians, their dogs, kids on bikes, scuba divers, and the funky dancing lady that needed the whole trail to get her groove on. Needless to say, it was an obstacle course out there.

Despite how tired I was, I averaged 6:19 pace for the marathon effort, 6:15 for the half marathon effort and 6:00 for the 3k effort. This was a tough workout especially the transition from 3k to marathon effort. I stopped a few times for water, a pit stop and a stretch because my calves were tightening up on me. My belly was not happy for most of the run maybe as a result of an ill-advised trip to Sushi Revolution the night before. The sushi was good, but I didn’t quite know what I was eating until I took it off of the conveyor belt. I think I overdid it on the eel. I was very happy to be done with the workout as I sped to a 5:47-paced last minute. We conquered the 1 mile hill on the way back, and I knocked out my cut downs at the end for a total of 17 miles.

As we dressed for the wedding, that last 3 miles for the day kept bugging me. I couldn't let them go and concocted a hare-brained scheme to run them after the wedding was over, while people were dancing. The location of the wedding was adjacent to Chambers Bay Golf Course, which has a lovely, hilly, 3-mile hiker-biker path ringing it. The park was built on an old gravel mining site that the City decided to turn into a golf course and recreation area.

The wedding was wonderful, and everyone had a great time. I was self conscious about my racerback tan lines exposed by my backless dress, but not enough to do anything about it. I was relieved to hear a couple of the wedding guests remark about it saying that I should consider it a badge of honor. I like that. Drinking started early with a beer or two, turned into nerve-calming shots of rum right before the ceremony (courtesy of one of the bridesmaids-DNP), and ended with more beer, red wine and champagne. I was having a great time dancing to Thriller and other classics until about 9:45 when I realized I better change into my running gear and get going!

I wadded up my dress, changed into my running uniform and shot out the back door to go find the trail. It was dark by now, but there were some lights to point the way. Once I started running I realized that I was hammered. I found the sensation of running while intoxicated very interesting having never done it before. I have no idea if I was weaving along the path, but the world was rushing by me in slow motion as if I was watching a movie frame by frame in front of me. I avoided tripping over or running into any of the half dozen or so people I saw on the trail and enjoyed watching bats circle over my head snapping up the bugs I was probably getting ready to inhale.

I screamed down the switchbacks in the dark and loped along the flats. Then, I hit the 3-minute hill at the end of the loop, which I was supposed to attack at 3k effort. This hill and I had met before. I had used it for 3-minute hill repeats when I was in Tacoma on vacation two winters ago. It is 11% grade and completely unforgiving. I decided it’s much easier to run a hill of this quality while drunk than while sober because I didn’t seem to care how my legs felt. I was too busy concentrating on keeping my food down. I narrowly escaped a series of ankle bites from two vicious dogs on my way to the top of the hill. Or, maybe my drunken mind conjured them up to keep me going to the top where I did a little happy dance and ran back to the party.

I danced until the last song played--Hit Me with Your Best Shot by Pat Benetar--but took no more shots myself. We then helped with clean up to wrap up the night around midnight. It was a long day (followed by a 4:45 a.m. wake-up call for our early Sunday flight), but a great weekend full of family, friends and running.