It is somewhat hard for me to believe that it has been 7 weeks since I was taken out of action by this calf/achilles injury.  I am happy to report that I have been making steady progress with my rehabilitation and have returned to regular, pain-free running.  Up until last week, I had been testing my leg by running consecutive days.  While I was keeping these runs short, by the third day of running, I was generally pretty sore and had to rest from running for a couple of days.  I finally started running slightly longer, every other day and found this to be sustainable.  Last week for instance, I got in two, 8-mile runs including strides and two, 6-mile runs.  With each day of running, my leg felt better and better.  This week, I'm working on running nearly every day in a long, short pattern for a total of 40 miles.  That is a big week. 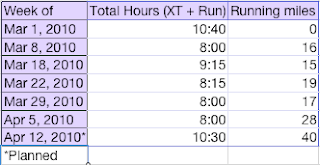 My fitness world has been transformed from a fixation on running mileage to focus on how many total hours I work out (not including strength training and yoga) during the week.  However, I do like to convert that back to the equivalent amount of mileage I'd be running for that amount of time, since, I am after all a running geek at heart.  For instance, a 10-hour week would roughly equate to an 80-mile running week assuming an 8 mph average pace (a little on the slow side).


As I'm returning to running, I realize that all of the cross training has paid off.  I generally feel pretty fit, though I haven't started doing hard workouts yet.  Still, striding along at 5:30 pace feels good and doesn't require a ton of effort.  I've even thrown in a couple of 800m intervals at marathon pace (6:10) and those didn't feel too bad either.  Believe it or not, I think I'll miss some of the cross training activities, except the ellipti-devil, when I get back to higher running mileage. These past few weeks of biking and pool running have been fun.

Last week, I rediscovered a great yoga workout video featuring Rodney Yee called Yoga Conditioning for Athletes.  My coach had recommended it to me a couple of years ago, and I used it a lot for a while.  As with most other non-running activities, my yoga practice fell by the wayside after a few months.  I relied mostly on the TP massageball kit to work the kinks out of my legs thereafter.

I didn't realize how tight I had allowed myself to become until I did the video the other day and had trouble doing poses that I had easily mastered the last time I tried it.  While I've read conflicting reports on the importance of flexibility for runners, I know that I am tighter than I have ever been in my life and I have to assume that's not a good thing.  I don't suspect I will be a good yogi for long, but I want to believe I'll find the time to do this yoga routine now and then to keep a little Gumby in my body.

I'm still not out of the woods, but I am making good progress at this point.  This week will be a good test of my readiness to return to running workouts.  I hope to run 6 days this week for a total of 40 miles.  I will try an 11-mile 'long' run including some short intervals around a moderately hilly lake this weekend.  If all goes well, I will be trying on some harder running workouts next week and will hopefully start up my speed-demon training in preparation for a couple of short, focus races.  I can't wait to get out there and start tearing it up again!

P.S. Sprinkles I promised I wouldn't mention DiaB.  Proud of me?
Posted by Jaymee at 5:21 PM