A race and a toy

I am happy to report that I finally ran a good 5k: the best I've run in over 2 years. I ran the Sacramento Run to Feed the Hungry on Thanksgiving Day in 18:13 and placed 4th overall; second master. I love running this race and have done so nearly every year that I have been running. In fact, the throw-away shirt I wore to the starting line was from the 2005 event.

I had a lot to be excited about before the race. My Garmin Forerunner 620, which I ordered through REI in late September, finally arrived earlier in the week. I couldn't wait to test out all of the new data collecting features. It gave me such a warm fuzzy feeling inside while I was racing to know that my little watch was gathering all of this data that I could go home and geek out over later in the evening.

Let's back up a bit to review my last couple of weeks of training. I have been on a very conservative program to allow my leg to get its groove back. While I have been able to run short, fast workouts, I can't get past about 8 miles of running without feeling pain. My body is still using the same old, tired pattern that it's been using the last couple of months that causes my right glute to become very fatigued by around mile 5 and all hell breaks loose down the rest of the leg. If I run fast for 2-3 miles in the middle of that, I can get 8 miles out of the day.

This is obviously frustrating. While we may have pinpointed the hound-induced cause of the problem, so far we haven't fixed it. After laying off strength work and some of the exercises that John Ball had given me to do to allow some muscle activation exercises to work their magic, I am jumping back on the strength train. I noticed a marked regression the second week after stopping the strength exercises even adding in several complete rest days.

As a result of this prolonged injury, I have only been able to average about 30 miles per week for these past 9 weeks. A friend of mine said that she was glad I was being smart about the injury, but it's really not about me being smart. I would love to be able to be a dumb runner and continue to run through the pain. I literally can't run more than I have been. The pain stops me.

Given the state of my training, I was uncertain about what to expect in Thursday's race. I have had some great speed workouts, though they have been limited to 2 miles or less total volume of fast running. I have done a couple of tempo runs over the past month as well. I thought I might be able to hold 6:00 miles on a good day.

The hardest part about this race was getting to the starting line. Aside from the fact that I was nervous about having my leg give out during the race, I also hadn't run a decent 5k in a long, long time. The few short races I ran over the summer and into the fall were disastrous. I also don't like the special pain of racing the 5k. While I think that might be the case for many people, I do know some crazy ones that love the feeling they get from the 5k. This girl would much rather run a marathon.

I actually felt good during the race for the first couple of miles with splits of 5:42 and 5:51. The last mile was a 6:02 and definitely reflected my lack of endurance. Nonetheless, I was very happy with this race. It's clear to me that, once I can resume full training again, I have a great base of speed to work from.

When I got home and downloaded my data, I really did have a great time looking at all of the new information. The Forerunner 620, when coupled with the heart-rate monitor, has the ability to collect data on all kinds of running economy-related variables. It measures ground contact time, stride length, stride rate, and vertical oscillation. It also attempts to estimate your VO2Max. That one needs some work. After running an 18:13 5k, it told me that my VO2Max was 47 and predicted I could run a 22:30 5k. Um, yeah. UPDATE: Something magical happened and my VO2Max just increased to 53! While still on the low side, it's much closer to the 56 that I estimate it to be right now.

The other measurements may or may not be accurate, but they did change in a predictable way as I became more fatigued at the end of the race. Here are a couple of charts from my 5k race: 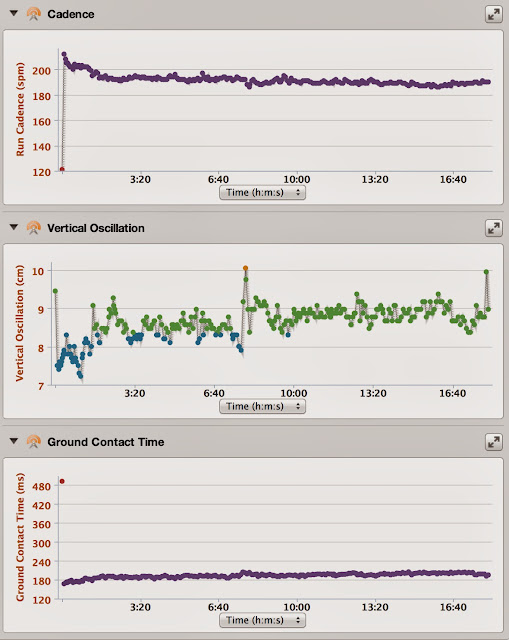 It's pretty clear that my efficiency decayed about halfway through the race. I got all bouncy and spent more time on the ground in the second half. I also liked being able to see what my heart rate was doing during the race. I never looked at the value while I was racing, but it was nice to confirm that what I have been calling my max HR is probably pretty darn close. My HR took about 2-3 minutes to reach a peak value of around 180 where it stayed the rest of the race. I have estimated my max HR to be around 185-190. It surprises me a little that I could run for 16 minutes that close to my MaxHR, but I guess that's why the 5k hurts so much.

Another thing that's fun to do is to compare some of these values with different running efforts. I have done this below with an easy run and my 5k race. Notice the big difference in cadence, vertical oscillation and running stride length between the two. It will be fun to see how/if these values change as I am able to run more mileage and resume doing drills, strength training and strides. 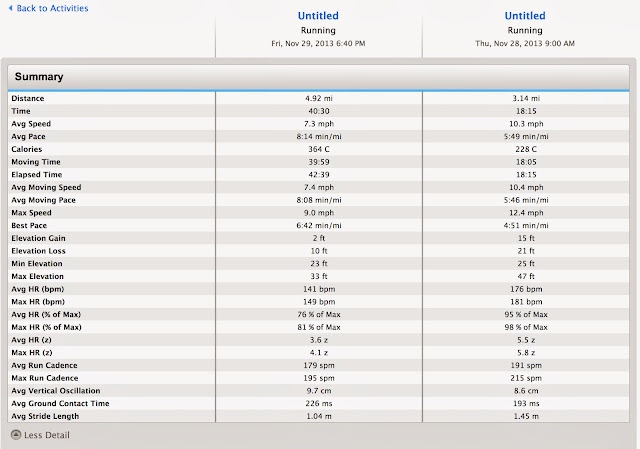 All in all, I like the new Garmin. It's much lighter, fairly easy to use and only has a few glitches that I assume they can fix with firmware updates (can't transfer via wifi on some computers--appears to be a known issue). I am looking forward to testing out the 'find my runner' feature using the iPhone app so the Genius can find me when I'm out on my run. I think this will be a super handy feature to have during a marathon, where you will know exactly where your runner is on course at all times!

At this stage in the game, I am taking my training day by day. I have a training plan but am never sure whether I'll be able to complete the workouts or not. It is emotionally hard but I try to have few expectations for each run. When I do, and they go poorly, it can ruin the rest of my day. This is why I do most of my runs in the evening these days (followed by some wine). Conversely, when they go well, it can mean a really fun ride until the next run. I am still riding the high of that 5k last Thursday.