Knowing when to fold 'em

I dropped out of a marathon yesterday. It wasn't an easy decision and took me six miles to make. Of all distances to DNF (did not finish), I think the marathon is the toughest decision of all. So much work goes into preparing for 26.2 miles and to not get to test your fitness after months of hard work is very disappointing.

I have dropped out of exactly three races in my career including yesterday's Napa Valley Marathon. I have also finished races that I probably should have dropped out of or not even started. The decision to stay or go is always a personal one and has to be one that you can live with.

When I first started running, finishing every race was my main goal and I powered through lots of bad days to earn the finisher's medal. For better or worse, I became a competitive runner with a concomitant change in my perspective on racing. My lofty goals required a much more measured approach to these decisions about when to stay or go in a race. It wasn't until I became really, really injured that I understood the gravity of this decision when damaged body parts were on the line.

Right after I qualified for the Olympic Trials at the Chicago Marathon in 2010, I was high as a kite and scheduled to run the Athens Marathon as part of the US Military Marathon Team only three weeks after Chicago. I had always been able to parlay my marathon fitness into multiple marathons without doing damage in the past and expected this to be no different. Two weeks post-Chicago, I was on a training run and started to feel a stabbing pain in my outer knee that was absolutely debilitating. I could not run. I kept trying, but this problem would not resolve. I decided that I would not miss the opportunity to run in Greece and represent the US in a World Championship race, and went ahead and ran Athens.

The Athens course is brutal. Lots of uphill, but worse, the last 10k is all downhill. My knee was hurting from the first step and eventually went numb as I pounded downhill to the finish in the ancient Panathenaikos Stadium. My performance led the US team to a Gold medal and I absolutely cherish every bit of that experience. However, I had no way of knowing the cost of running that race injured. I paid for it with over 6 months of no running due to this injury. In some ways, I think that prolonged injury also set me up for a cycle of similar and serious injuries over the next several years as I came back (probably too quickly) to running only to get sidelined over and over. 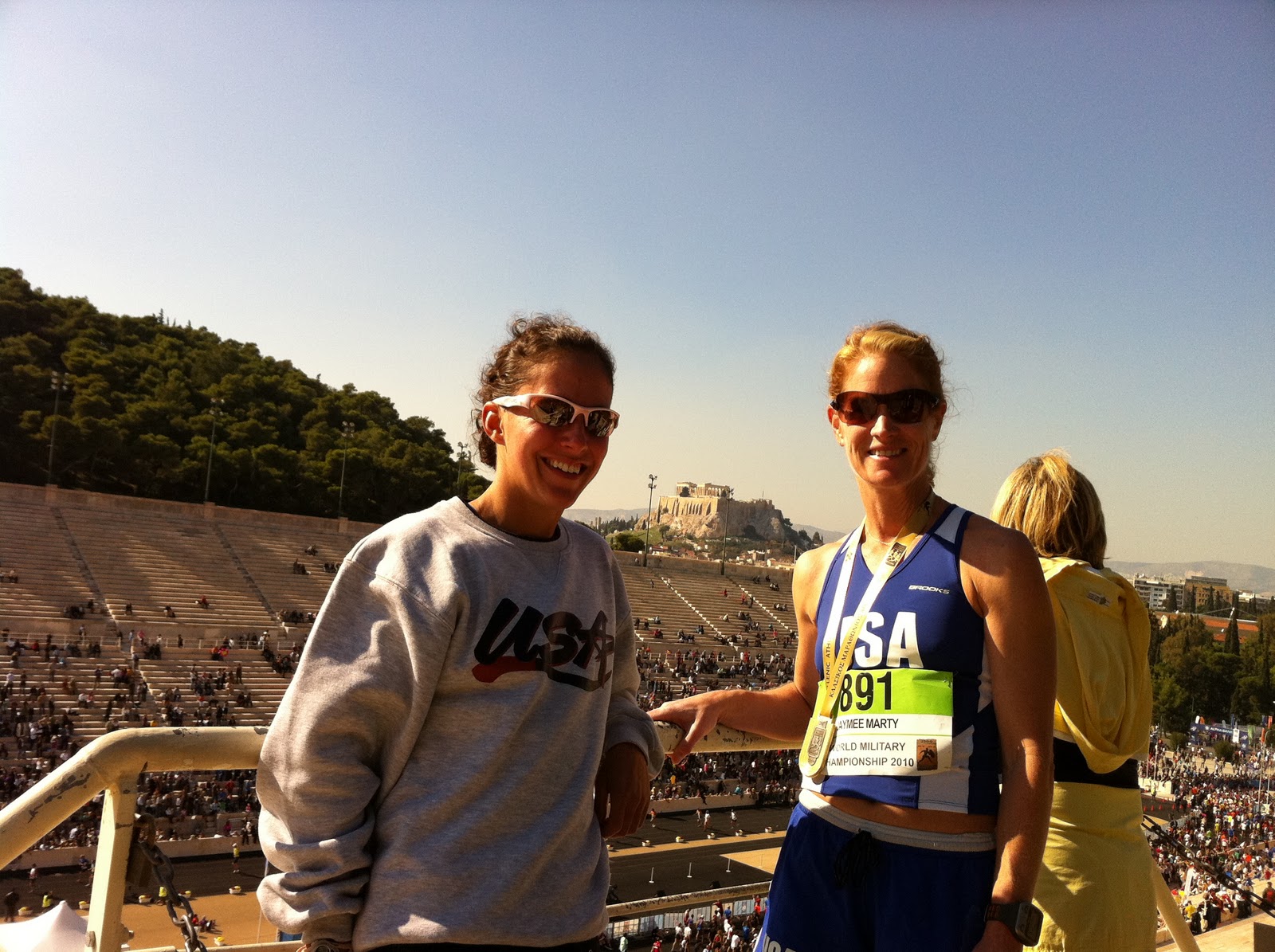 So, back to yesterday's race. I went into the race with nothing seriously wrong with my body. I made it through the heaviest training I had done in over 5 years and was actually patting myself on the back for keeping all the niggles that had popped up at bay. For over a year, I have had a constant and very active exchange of power going on between my left foot/leg and my right hamstring/glute. Sometimes, they both hurt, but most often one or the other is getting my attention. I have successfully trained through this with a combo of massage, rolling and targeted strength training. When it is really getting my attention, I am much more diligent about my treatment regimen. In this training cycle I was very aggressive early on in treating the imbalance and actually had both problems resolve completely. So, what did I do? I stopped doing my rehab. Yes, I know. This was stupid and contradicts what I tell the athletes that I coach. I am human too.

My left foot was getting my attention more and more the last couple of weeks. I didn't pay much attention given that I was starting my taper and thought I'd have plenty of time to work it out before the marathon. That didn't really happen. I just hobbled around when I woke up and forgot about it as it loosened up throughout the day.

So, yesterday, I was feeling good at the start. Everything had really gone very well aside from some unnecessary negative energy during race week that I couldn't seem to brush off. From the gun, I felt fine running with the lead women's pack: a couple of runners whom I really respect and was excited to race. I think it was around the two or three mile mark when my right leg started to feel weird. It was a soreness that ran from the glute down the outside to the lower leg. I thought this was just a stupid muscle tweak that is pretty typical early in a race. I thought it would go away. Instead, I started to lose power in that leg. I couldn't seem to push off. It became more and more work to keep up the pace and I started to drop back from the pack. I figured I would give this thing a few more miles and just see how it played out. It did not resolve and instead got worse. At this point, I started running through the decision tree of pros/cons and if/then scenarios. I had set goals for myself to make it to the starting line of this race and accomplished that. I had also set a goal to make it to the finish. How badly did I want that? Not enough to risk injury that would possibly sideline me for months and ruin any additional shot at qualifying for the Olympic Trials. Not worth the cost.

Maybe even harder, was thinking of disappointing an entire group of runners that I had convinced to run the marathon and train with me as their coach, many of them running their first. While I could have "gutted it out" and made them proud of my courage through adversity, I decided I would rather show strength in character and make what for me was a harder decision to let this one go in favor of a bigger goal. I think this latter perspective is one that gets less play in a world where "no guts, no glory" reigns supreme. I want my athletes to push themselves while having respect for their bodies. Learning when to push hard and when to pull back requires maturity and wisdom. I can't ask this of my athletes if I am unwilling to set the example myself.

As I hobbled out of bed this morning and felt like I had been hit by a Mack truck despite only having run 9 of the 26.2 miles yesterday, I knew my decision was the right one. I'll get back into my rehab regimen and be back on the roads in a few days. I haven't quite figured out what is next on my dance card but will certainly post about it as soon as I have a plan.

Congratulations to all of the RunAwayFast and P2O Hot Pilates runners who completed the Napa Marathon yesterday. It was an amazing thrill to watch you accomplish your goals. I am so proud of all of you and grateful for having had the opportunity to train with you. 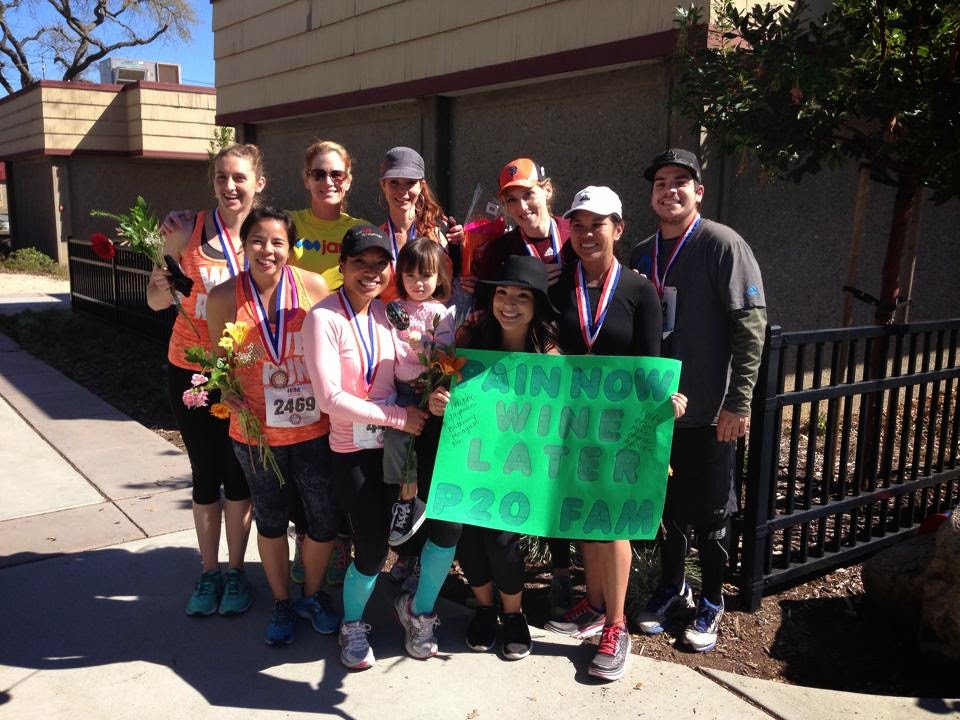