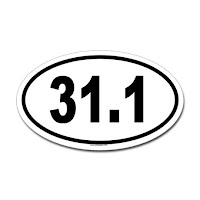 I have some exciting news! I am planning to run my first ultramarathon! This will be a road 50k where I will shoot for the Masters' national record. I will attempt this at the Jed Smith 50k in February. I have actually been talking about this goal for a long time, but I wasn't sure I was ready to let go of the Olympic Trials qualifier goal. Now, I am.

Rewind 6 weeks--My training was going fine for CIM. I was running consistent, higher mileage and doing some races here and there. I was putting in the work and waiting for my workout times to fall. They didn't. The problem is not my fitness level, but my biomechanics at this point. For as long as recent memory allows, I have had a hitch in my left side. It wanders but is typically pain/weakness in my lower left leg. This leads to a lack of power in that leg. I notice it most when trying to hop on one leg. No push off. So, I am not able to propel myself forward fast during workouts when half my body lacks power. This became more than just an annoyance a couple of weeks ago when I felt my left glute/high hamstring tighten up during the Clarksburg Half Marathon. That tightness turned into a stabbing pain in my ass, literally--the old piriformis acting up again. I knew if I was smart I would still be able to run CIM, but any hope of a super fast time was out the window.

I was also lacking the belly fire needed to achieve the OTQ goal. This entire training cycle--well this entire year--I was waiting for that fire that would ignite the same drive I had to qualify for the 2012 Trials. That fire never even became a spark. I loved having the hairy goal out there to push toward. I truly believe in setting those for myself because they make me work harder and push myself farther than I would without them. It wasn't really that I didn't believe I could achieve it but that I didn't want it bad enough to make the sacrifices to achieve it.

SO, I am running CIM. As with all of my marathon races, I have A, B and C goals for this one. The A goal was always to run fast, relatively speaking. The B/C goal is to make it to the start and finish lines, which will lock in my Pacific Association USATF Masters Long Series title for the year. This last one is big for me. First, I haven't raced a marathon in almost 3 years. The last one was the Eugene Marathon in 2013. Winning the PA Series is kind of a points game since you can win or place well just by showing up to the races and placing fairly high at each race. For me, however, it means that I raced consistently all throughout the year. With a year of significant health issues keeping me from racing last year and a couple of years of injury before that, consistently racing is a big deal.

With the 50k on the horizon, my focus for CIM has changed a bit. I will be looking to run a fairly hard race but I'm not going to jeopardize a finish nor run so hard that I require a long recovery. I have no idea what that will look like on the clock on race day, but I am looking forward to seeing how it unfolds. This pain in the butt I've had is clearing up with some activation exercises prescribed by the ever-capable Dr. Lau at Elite Spinal and Sports Care and acupuncture treatment from Bradley at ProActive Acupuncture in Midtown. The acupuncture is blowing my mind with how well it works. I do have a long row to hoe with this dysfunction, but I'm on the right track.

The 50k is a short 8 weeks from CIM, so I will need to come out of the marathon healthy and turn around the fitness I have built to be able to run at a good clip for a longer distance than I ever have in my life. That is an exciting goal for me! As for my future in ultra racing, I really don't like running on trails enough to commit to any trail ultras.  But, I didn't like running at all for the first 36 years of my life, so I have learned to never say never!

Good luck to everyone running CIM. I will be dedicating my race to my dear friend Jane Inouye.

Oh, I guess I forgot to mention that I set the American 5k record a couple of weeks back. NBD.