I can eat anything I want, and I choose... 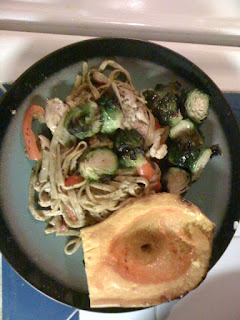 Brussel sprouts? That's right, Mom. Brussel sprouts.
It dawned on me tonight, when I was deciding what I was going to have for dinner, that something about me has fundamentally changed over the last 5 years. That I have become what could be described as addicted to running is obvious if you've read any of my posts over the last few months. But what really snuck up and bit me tonight, was the fact that I actually crave good food. I always believed that people that said they were craving butternut squash or a radicchio salad were full of crap. Who craves that kind of stuff? I was convinced that they were just a bunch of liars because real people craved deep-dish pizza, Snickers bars and Krispy Kreme Donuts.
In fact, my junk food crackhead ways were so fundamental to my persona that I used to take great pride in (perhaps even flaunt?) my sugary, anti-leafy-green habits. This was all personal choice, of course, and it started at a young age despite my Mother's best attempts at forcing green shizzle down my throat. I became very adept at faking a cough into my napkin thus masking my regurgitation of green beans which would later be flushed down the toilet post-meal. My favorite childhood snacks were frozen pizzas and a 1/4 brick of cheddar cheese melted in the microwave and glopped atop saltine crackers. Mmmmm.

I may have reached an all-time low when I had my Mom ship boxes full of Chef Boyardee Sir Chomps-a-lot bite size canned raviolis to me while I was stationed in Germany because I was having trouble finding good (junk) food there. Yowza.
I initially took up running with a goal to complete a half marathon, but I can't lie and say that the thought of shedding a few pounds from my then 143-lb lard butt didn't have me secretly trembling with excitement. While I am nearly 20 lbs lighter now, that didn't come off quickly with the addition of running to my life. I started out like so many newbie exercisers/runners thinking that I was burning so many calories that I could eat even more junk. No surprise that I lost only 10 lbs over the next 4 years even though I was running 90-100 miles per week at the height of my marathon training.
The truth is, I can't eat anything I want if that anything is chocolate covered snickers pie and canned ravioli. As I've said before, achieving my lofty athletic goals requires discipline in many areas of my life with nutrition being at the top of the list. This article in Running Times describes the different relationship that African runners have with food compared to Westerners. They view it as sustenance in the very literal sense of the word: no emotion attached. Mike Kibe, a Kenyan runner interviewed in the article says it this way, "nothing is bad when you eat it with discipline...we eat to help our training not like there's no tomorrow."
I can't say whether forcing myself to cut out the crap and embrace good foods created the shift in what I find in my feed bag today, or whether the demands of hard training created a craving for these foods in my body. While it might just be a chicken and egg dealio, I can't deny that the cravings I have for foods like squash, brussel sprouts and mache are very real.
This post should give parents of junk-food-craving kids some hope, though it may take 42 years for them to finally swallow their beans.
Guten appetit!
Posted by Jaymee at 7:07 PM