Today was like Christmas or my birthday because I received my new training plan from my coach. It is a 21-week doozie that begins with about a month of recovery and then launches into 21 weeks of fun that will prepare me for my next marathon. So, what is my next marathon?
Well, I went through quite a process to decide which spring marathon I would run to try to break 2:46. While there are numerous options, I narrowed it down to either Boston or Eugene. I received many other good suggestions including the LA Marathon, Shamrock Marathon in Virginia Beach, the National Marathon and Napa. I decided Boston and Eugene provided the best options for me to achieve my goal.
I've run both before. Boston was my second marathon in 2005, and I ran Eugene in 2007 and 2008. Boston is attractive to me because I know there will be other very fast women there and likely other women trying to run 2:46. It is also a fairly fast course if you are a good downhill runner and if there's good weather. There's also the prize money enticement. The problems with Boston include an early elite women's start which you have to use if you want to compete for money. This is kind of cool since you get to run through a virgin crowd but it is not so cool if you fall off of a pack and are out there floundering on your own. The big unknown for Boston is always the weather. When I ran it in 2005, it was hot and miserable. They've had colder weather in the past couple of years, but headwinds are always a concern particularly on the last stretch into the city.
Eugene is a nice, small race. The scenery is beautiful, running along the Willamette River for much of the second half. It is fairly flat, and this year they're supposed to finish up at Hayward Field. In past years, the race started at Hayward and finished at Autzen Stadium. The weather has also been ideal for the 3 years that the race has been run. The main problem with the race is that it has not been very competitive. The first year saw some fast female finish times because several women were using it as a qualifier for the 2008 Olympic Trials. The second year, I led the race for a few miles and ultimately placed second with a 2:55. Last year's winner ran just under 3 hours. I have heard rumors that they plan to offer incentives for those trying to qualify for the Trials. That might bring in some fasties.
So, I decided on Eugene for the above reasons and a few more: 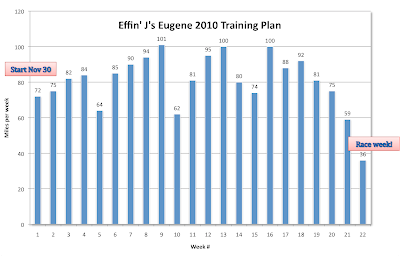 So, my plan takes me to May 2nd, race day in Eugene. The general breakdown is: 5 weeks of general strength training, 4 weeks of general strength training with a side of speed, 5 weeks of hills and marathon specific training, and 7 weeks of marathon specific training + race week. I've been busy inputing the workouts into iCal and noticed a few novel things about my new training plan right off the bat. The volume is slightly higher, but the intensity is clearly kicked up a notch. In the 21-week meaty portion of the training plan (after my recovery phase), I found:
I will now spend the next few weeks convincing myself that I can do this. I will explain to myself that I've completed training plans similar to this before and am ready to take it to the next level. All the while, a nugget of doubt will sit in my amygdala and cause me to question every workout. Somehow, I will manage to overcome my insecurity and fear each day, become fitter than I've ever been in my life and give it the old college try on race day. It will be a fun ride indeed!
Posted by Jaymee at 7:53 PM