On science and running 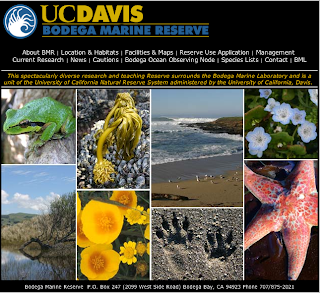 This week, I was sequestered at a science writing workshop at the Bodega Marine Lab with 20+ of my geeky science colleagues from The Nature Conservancy. Since I’m in recovery mode, running has not been the central focus of my life, but it is never far from my heart. The atmosphere of creative energy during these writing fests is always inspiring and this week provided a great distraction to keep my mind from obsessing on how little I'm running.

The running high I’ve enjoyed for over a month is starting to wear off and has forced me to put my life back into perspective. Like an addict looking for the next fix, I was all fired up to keep pushing myself after the Marine Corps Marathon. My coach (aka training colonel) ever so gently talked me off the ledge and convinced me to take my recovery more seriously. And, I am listening. I have run only 4 times since my last marathon and the cold I have been battling is finally on its way out. My cold did serve an alternate purpose, providing me with a sexy smoker's voice for a concert that I played tonight. I was able to get away with a Johnny Cash song (actually a 9 Inch Nails song as covered by JC) that just has less of an effect without a little rasp and vocal depth that comes from either smoking or lots of phlegm.

So, back to science and running. A post in the Science of Sport blog last week caught my scientist’s eye. Ross discusses the use of science in coaching and states that the most successful coaches use the scientific process with their athletes. I would like to carry that one step further and propose that athletes benefit when they think about their training scientifically. I have talked with many runners that laugh at the fact that I wear a cigarette-pack-sized GPS unit on my wrist for every run, or that I painstakingly record every workout in a relational database, or that I keep a log of how I feel before and after every workout, or that I record weight and body fat measurements every day. What they’re missing is that this is all part of a grand experiment: sample size (n) = 1 and control = 0! As a matter of fact, this data forms the basis of my training and aids in my improvement as an athlete. One might even say that it is one of those elusive secrets to my success.

But, I didn’t always think like a scientist. After reading the blog post I began to reminisce on my transformation as both a scientist and a runner and the interaction of the two.

Born to run (in a multi-variate statistical sort of way)

In defiance of my early acquisition of an INTJ Myers-Briggs brand, I chose a dodgier career path in management out of college (INTJ is actually called The Scientist: I have the barcode on my right earlobe to prove it. As an aside, Lance Armstrong and Hanibal Lecter: both INTJ). While I got by as a manager and found it mildly entertaining for about 6 years, I was constantly trying to solve problems using what I would later find out is the scientific method.

I finally embraced my inner-geek and dove into the field of ecology with both feet in 1995. I landed in California after an Air Force tour in Germany, leaving management and the active-duty Air Force with hopes of becoming a certified science genius in ecology. The odds were not in my favor at this point. I had a non-science undergraduate degree in Aerospace Management and little practical experience doing science. So, I needed to get my hands dirty in this new field and give it a test run. I wound up as an AmeriCorps ‘volunteer’ for a year making $600/month before taxes. While I amassed an amazing amount of debt that year, I also fell in love with science and ecology.

I applied to and was (amazingly) accepted into the Graduate Ecology Program at UC Davis in 1996 and started pursuing my Ph.D. While I thought like a scientist, I had no flippin’ idea what I was doing at that point. Drinking water from a geyser is about how it felt my first year in grad school. I was simultaneously learning the basics of ecology, biology, botany, genetics, etc. in an attempt to make up for my lack of undergraduate training in these areas while also taking graduate-level ecology classes. As I became immersed in my new field, I realized just how fun it was to systematically solve problems using a butt-load of data, some sweet statistical software, all nuanced with a bit of keen personal observation. I was finally formally using the scientific method and dug it to no end.

Here’s how the scientific method works:

This is the scientific process that Ross talks about in his article (well, he might describe it slightly differently). It doesn’t mean that you blindly follow Jack Daniels’ training prescriptions or read Noakes’ Lore of Running before bedtime every night. It means that you’re aware of the science and you use it to form educated guesses about how you’ll do in race X using training plan Y. You do the work prescribed in your training plan and collect the data along the way including the final piece of data: your race time. You then go back and attempt to divine why you did or did not meet your goal and revise your training as appropriate.

My coach and I both think like scientists and use this process to improve my training and make me faster. That's why I think we make such a great team.

So, my advice to you, dear runner, is to embrace your inner scientist and go get that 5k/10k/marathon PR. Or, continue to rely on voodoo and necromancy to get you across that finish line faster. Your choice.