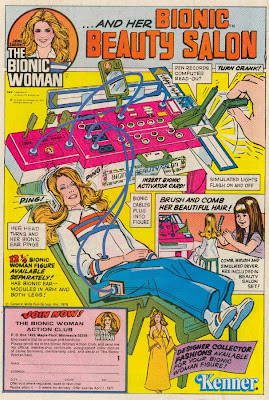 I was hooked on the Six Million Dollar Man television series growing up and often pretended I was the bionic woman, Jaime Sommers.  I'm sure, if someone had asked me back then whether or not bionics would be available for failing body parts by the year 2010, I would have believed they would be.  While humans have invented replacement body parts, they typically do not perform as well as the real thing (maybe excepting Oscar Pistorius' blades).  I have not yet found a bionic replacement achilles for sale even on the internet, though apparently the Bionic Beauty Salon was once available.  How did I miss that?

In my last post, I discussed my new plan to slowly ramp up my running mileage.  I had a nice 6 mile run on Friday where I actually decided to run over some rolling hills rather than walk up them,  and I hit 6 miles with no pain.  My achilles was slightly sore following this run, but a little massaging of the tendon relieved that almost instantly.  Saturday morning and afternoon got away from me with various errands and tasks, so I decided to just go ahead and do another "long" run that evening--discarding my short, long, short pattern.  This was a bad idea.  My achilles tightened up after the first 4 miles of 6 total.   I had to do some walk/jog intervals to get home in order to minimize the tightness and pain, which were both mild.  Again, massaging the achilles helped, but I was still sore.  I was really hoping that I would have one of those breakthrough runs where I was gamboling recklessly along the bike trail free of any tightness and pain.  Saturday's 6 miler made me realize that I may have a longer row to hoe than I thought.

This sequence of events led me to the realization that I needed to make a tough decision.  The easy part was deciding to throw in the towel on the Eugene Marathon, scheduled for May 2nd.  The tough decision was whether or not to bag the idea of running a spring marathon altogether.  I researched the hell out my options and came up short.  There are some potentially fast races out there, but most of them occur too close to Eugene for me to feel confident in being able to ramp up.  The reason I would try to run a marathon this spring would be to capitalize on the great fitness that I have (had?) before becoming injured.  I finally realized that leaving the possibility of running another marathon hanging out there was causing me to make decisions that are not helping me heal.

I first divulged this new plan to The Genius and felt instantly like a weight had been lifted.  No more worry about missing out on yet another week of long mileage and hard, long runs.  Instead, I can focus on staying fit, healing and look forward to incorporating quality speed work into my training.  As I have mentioned before, I have been solely focused on marathon training since I began running in 2004, and have spent nary a month focusing on short-distance speed.  This will be a change.

The prospect of training for a fast 5k and/or 10k race is exciting to me.  Aside from striving for PRs in these distances, I know that developing my speed will make me a faster marathoner.  Right now, I'm tentatively thinking about a 10k race over Memorial Day weekend (heel healing dependent) and running at least the 5k in the National Masters' Championship Track Meet here in Sacramento in July 2010.  I'd love to get my 10k time down into the low 36s and my 5k into the low 17s.  Of course, I have to be careful with my training not to injure some other random body part in the process, but I feel like a slightly wiser runner at this point.

I am fired up about this focus for my future training.  I assure you that I am cross training like an animal so that I can step back into my running, when my non-bionic tendon is ready and willing, with zeal and a renewed lust for this crazy sport of running.  We can rebuild her.

P.S.  My focus race for the fall will be Chicago.
Posted by Jaymee at 6:23 PM