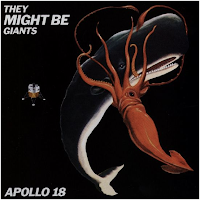 But she seems much bigger to me."  For some reason, those lyrics to the classic They Might Be Giants song run through my head when I think about my achilles tendon.  I think anyone else looking at my ankle would think it looks the same as the good foot, but to me it seems ginormous.  I still find myself favoring my left foot here and there when phantom pain presents itself. However, for the last couple of days, I go for long stretches without even thinking about it.  Progress.


This is an improvement that makes me happy, of course, but I am being more careful about my rehabilitation.  I found it interesting when I looked at my training log that I have actually run 12 days since I was afflicted with this injury 28 days ago.  Most of those days were trial runs, between 1.5 to 6 miles, that showed promise until I pushed it a little too hard.  Over the last three days, I have run slow, short runs.  I have been paying close attention to any tightness or pain I feel during the run.  I have found that, if I feel tightness for more than a mile during the run, the calf/achilles will be sore later and usually the next day too.  My new threshold is no tightness and definitely no pain during the run.  If I feel it, I stop.  I am happy to say I’ve met that mark for the last three runs.
What came as an even bigger surprise to me was the concept that I should run during the rehab phase.  This first came from my Miracle Worker when I suggested I just take another week's rest from running. He shook his head and said, "No.  You need to keep running, just not as much."  His explanation was that without the stretching that occurs during running the scar tissue that inevitably forms with this type of injury would heal the tendon to a shorter length or at least create a tendon with less running specific flexibility.  This was my interpretation of what he said, anyway.  The second place I saw the suggestion to rehab with running was in this article about the achilles tendon that focuses a lot on the concept of "active loading".  The authors state:
A short period of rest from running during the initial acute painful phase followed by a specific loading programme is sensible. However, the tendon loading and coordinative challenge of running suggest that running should become a central component of your rehabilitation strategy and indeed there is scientific support for continuing to run during rehabilitation, as long as the pain does not exceed moderate intensity (26). Accepting a tolerable amount of running discomfort may also help avoid the negative tendon and muscle consequences of protracted rest. The margins are vague, however, and the line between acceptable discomfort and disabling pain is very individual.
This advice is definitely contrary to what I've read almost everywhere else, and that's probably why I like it.  I think the key is in making sure that the use of running in the rehabilitation phase does not cause further damage.  That's the fine line I walk these days.

While somedays I am frustrated with this injury, I have been enjoying my cross training.  Tonight, I tried out my alien swimmer outfit at the Y and made quite a splash (couldn't help myself with that pun).  I purchased these AQx aqua running shoes and was quite pleased with how they performed.  I also bought my own floatie belt. So, picture me walking next to the pool in my cornflower blue bikini, black swim cap, goggles with Michael Phelps tune case attached, shoes with fins and a bright red swim tube around my middle.  Dead sexy.
I also enjoy my bike rides on the bike trail where I do fun interval sessions.  The best part of these rides is passing people like they're standing still.  The other night, I was doing 3 minutes hard/1 minute easy repeats and had this dude come zipping past me while I was spinning before starting the workout.  He passed me decisively and I thought to myself, "I'll see you again soon enough Postal Service Bike Dude."  Once I started my intervals, I started gaining on him.  As I approached his bike, pushing about 23 mph, I could see him kick it into gear and speed up to keep me from passing.  He lasted about 30 seconds before dropping back as I pounded right on by.  Now, my heart rate zipped up into the 170s during that little frenzied episode, but I didn't see him again until I turned around at the 22.5 mile marker.  He gave me a big smile and a wave.  Love it!
Here's what I've been up to the last two weeks: 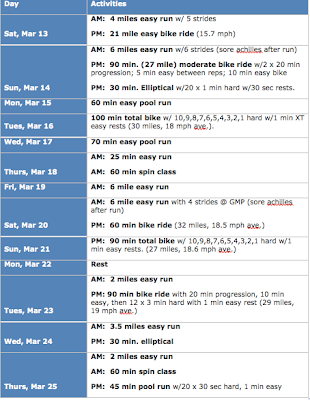 I'm looking forward to a little longer test run tomorrow morning and hope to report that it is pain free.  I have a super long and hard bike ride planned for Saturday and an even longer run planned for Sunday if all goes well.  The spin instructor at my gym (complete with calf-muscle triathlete branding) is trying to recruit me and Sprinkles to the dark side of triathlons.  While I might be competitive in an aqua-jogging-run-bike tri, I would totally lose it in the gang swim.  For now, I'll stick to running with a side of bike and aqua jogging as cross training.
Posted by Jaymee at 8:09 PM