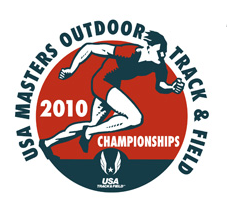 What a great experience this track meet has been.  It had been so long since I had spent this much time at a meet, I had forgotten about all of the excitement and emotion that is involved.  There's just something so cool about watching a fast 30-something speedster burning it up around the track at the same time a 75-year-old pole vaulter takes to the air and soars over the bar.  I had forgotten how emotional these events can be too.  There's nothing like that spontaneous welling up of tears that overcomes you when watching a particularly gutsy performance.  My hat's off to all of the athletes that competed this week in the track and field events.  And, a big thank you to all of the meet officials, volunteers and staff that made this meet possible.  It was a fantastic experience.

Today, I ran a race that is completely out of my comfort zone: the 1500m.  I was racing (and I use that term loosely) against a world record holder in the 2000m steeplechase (set two weeks ago and then broken this week), an Olympic Trials qualifier in the marathon (aka t-meat) and several others with impressive qualifying marks.  I had a really strong sense that this would be a tactical race given the favorite had run and won the 2000m steeple and the 800m over the last few days.  She has a big kick and therefore no reason to go out fast.

To set the stage a little, I didn't have the feeling of dread or resignation that I did before the 5000m race on Thursday.  Instead, I was excited, verging on nonchalance about this race.  It is so far out of my normal realm of racing that it just seemed like it couldn't be anything but fun.  When planning last night's pre-race meal, I recalled an interview with Bernard Lagat after a big 1500m win where he said he liked to eat a big steak the night before a 1500m race.  So, I decided that sounded like a smart thing to do and had a flank steak, mashed potatoes and green beans for dinner.  I washed it down with red wine, hung out with some friends for a bit and had a nice piece of leftover gluten-free chocolate birthday cake at home.  Luckily, this pre-race meal sat very well in me, and I think it might be a keeper for shorter distance races.

I was even more excited this morning warming up and watching my friends running their 1500m races.  It was fun watching the different tactics that were being used out there, though most of the races were pretty wide open within the first couple of laps.  I had a good warm up, changed into my spikes and headed out to the starting area for some strides.  As I darted around, I heard an overwhelming number of good luck wishes.  Thank you so much to everyone who cheered for me.  It was kind of humbling, actually.  Just before we lined up, I told myself, "Today, you are not a marathoner.  Today, you are a miler."

The gun goes off, and I start to close in on lane one from my position in lane 8.  T-meat is on my left and we immediately hear her coach yell, "Midori, do not take the lead."  As soon as that was said, there was a noticeable slowing of the pace as everyone bunched up into a tight pack.  I actually let out a little chuckle at that point.  I knew I was in trouble right away, because the pace felt so relaxed, just like the pacing of the mile race I ran in Davis a couple of weeks ago.  It was there that I learned that a tactical race does not favor my strengths.

I had a fantastic split taker (thanks Carla!!!) who yelled out "79, 80" as we came back to the start marking our first 400m split.  Damn. That was so slow.  I was in 3rd place at this point on the shoulder of the leaders and there were 4 of us bunched up into a tight little pack all in lane 1.  This was actually unnerving to me.  I was so worried about stepping on someone or being stepped on.  As we came around for the 800m split, Carla yelled out "80, 81."  We had actually slowed!  Ouch.  I knew what was coming, I just didn't know when.

From the looks of my Garmin output, the pace picked up with about 600-700m left to go, and boy, did it pick up.  I held my own through most of the third lap, struggling to maintain contact with the lead pack.  I was stunned when Carla gave me my splits after the race on a slip of paper showing a 73 for my third lap.  I think the lead pack must have done more like a 71-72.  Of course, I sustained that pace for about another 100m before my legs became cement and I began going backwards in a big way.  My last 300m split was a whopping 61 seconds.  I came in 5th in my race with a final time of 4:54, which is a big PR.  My goal was to break 4:48, but today's race was not a race for time.  I am more than happy to let the time goal go in favor of having given my best during the race and having remained a contender for at least 1200m against the talent that was there today.

As one of my Impala teammates said after the race: "you were in the race of the day."  It was that.

After the race, the winner (by 3 seconds!), Lisa Valle, came up to me and asked my name.  She was so impressed that t-meat and I, a couple of marathoners, were out there racing.  She congratulated me on a good race.  I think I may have genuflected slightly when I told her how impressed I was with her performances.   To that she said, "No, you guys are impressive.  I train for this every day, so I should be fast.  You guys probably have to go out and run another 20 miles today, right?"  "Ten." I said, with a smile.  She said she had another mile to run and she was done.

I was telling The Genius on our cool down run that I love these kinds of experiences.  You don't perform as well as you hope, but you know you can do better with more training and experience.  I developed a thirst for this speed stuff over the last couple of months and I find the prospect of dedicating a chunk of my life to getting faster at the short distances very exciting.  I also realized that is what it takes.  You can't expect a huge pay off from 4-6 weeks of speed training.  You need months, even years.  I am hoping that I can get my marathon qualifier out of the way this fall so I can do this speed training some justice in preparation for the Masters World Championships which will also be held here in Sacramento next summer.  How cool is that?

It's now time to shift gears for me.  I only have 11 weeks left before my big marathon in Chicago.  That doesn't seem like a whole lot of time to me.  But, I am ready to get back to what I know best: lots of miles and long, hard workouts.