I was running late for the track meet and barely had time to scarf down a bagel with peanut butter, cream cheese, a poached egg and ham.  Parking was a nightmare.  We had to park 2 miles from the track and I only had 20 minutes before my race started.  I was sprinting with my spike bag under my right arm, my special tea elixir in my left hand, dressed in my street clothes, hoping I would get to the stadium in time.  I had to climb a tree to get into the stands, but I also needed to find a place to change out of my street clothes.  I decided I didn't have enough time, so I dropped my pants right there and started flinging clothes everywhere.  I had 5 minutes before the race when I noticed that my bra was laying in the dirt at the base of the tree I had climbed.  Damn it.  I needed to retrieve that.  I couldn't leave it there for the world to see!  So, I climbed down the tree and grabbed it.  I stuffed it in my bag and tried to run to the starting line, but my legs were chained together and there was a lock.  This was really unfortunate. How was I going to get the chain off in time for my race?  Then, I heard a dog belch in the offing.  I opened my eyes and saw my dog Sadie staring at me.


When I have anxiety dreams like that one before a race, I know I'm in trouble.  From the moment I woke up this morning, I was filled with dread about this mile race.  And, you can see why with a terrible dream like that.  I have been training for shorter distance events for a little over a month, and my training has been going well.  What I really need is practice racing at these distances, and today's race was to be that for me.  Practice.  Just practice.  So why was I so anxious?  I have no idea.


What really happened before the race was completely boring.  My water retention issues have eased mostly, but not completely thanks (maybe) to the poopy cat barf cleanse I've been on (tomorrow's the last day!).   So, physically, all systems were a go, but mentally I was overheating.  I had a little time to jog for about 10 minutes before they called us to the starting line early.  I still managed to get my spikes on and do a couple of strides before we lined up for the last time and got our final instructions.  The faces in the crowd were familiar--there were some fast masters women in this race, which was great!


The gun went off and I found myself tucked in behind t-meat.  I knew that she would be running faster than me today, but I wanted to try to stick with her for as long as I could.  The pace felt leisurely for the first lap, and I was grateful that I hadn't gone out in the lead.  I would have definitely taken us out too fast.  I was wearing my Garmin (which I now understand is illegal), but I did not look at it at all in the race.  This was a mistake because the split timing was off, and for some reason, the clock was displaying our time at the finish line mark in the wrong direction.  (UPDATE: After viewing pictures of the finish, I now realize there was no clock).  So, our only feedback was coming from the person yelling the splits (Woo, Woo!), but I'm not sure what splits these were.  After our first lap (+9 meters), we heard 79, I think.  That was good, I thought.  I was still on t-meat's tail for the 2nd lap and we heard 2:30 as we completed our second lap.  This gave me a little pause since I didn't feel like I was running @ 5:00 pace.  Then, the leader kicked it into gear, and I did too--but not for long.  I was a few seconds back by the end of the 3rd lap and lost a few more seconds to the leader on the last lap.  Hard Coordt came around my 3 o'clock with 200m to go, and I just watched as she pulled away.  There was no fire in my belly to go along. Love this picture of the three masters: t-meat, Effin' J and Hard Coordt.  Thanks, D-Murr!

My finishing time was 5:17.  You may recall that I was hoping to be under 5:10, so I didn't meet my goal.  I did set a PR.  My (road) mile PR is 5:32 set in 2006.  I've never run a track mile before.  When I got home, I downloaded my Garmin data and was able to approximate my splits:
So, I actually may have unwittingly negative split that race.  No wonder the supposed 5:00 pace after the first 800 felt so easy.  While my time goal was not met, I was very proud of myself for getting my butt to the starting line and doing the race even though it was the last thing on earth I wanted to be doing.  This is always a challenge and makes me appreciate the days where I am super charged about a race.


I did a nice cool down with some of the other runners participating in what we learned were called the "Sacramento Senior Games", and then started the rest of my workout:

As I was running the sprints on the track, I heard an announcement for the 400m runners to get to the starting line.  I thought, hmmm.  I have to do some 300s anyway, maybe I should do the 400?  So, I ran over to the registration desk to see if it was too late to sign up, and I was given the thumbs up.  The Genius went to the car to retrieve my spikes and a ten spot to pay for my race entry while I waited in my lane for him to return.  With seconds to spare, he returned with the goods, I laced up my spikes and got into my crouching tiger position for the gun.  I have run the 400m distance a couple of times before and my PR was 67.52.  That's right: was.  I ran 67.26 today and won the race! 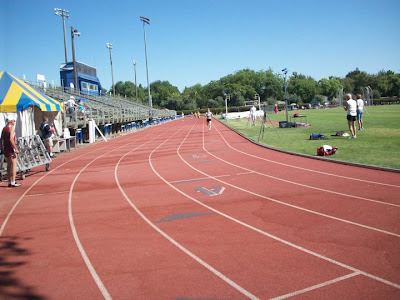 Sprinting down the final 100m of the 400m race. Thanks to Jimmy G for the photo.
I was impressed with my change in attitude from how I was feeling about the mile race to being willing to jump into the 400m race 7 minutes before it started.  It always feels good to me to run all out like that.  So, I just kept going.  I did my 6 x 300s and was surprised at how much pep my legs still had on that track as it heated up in the late morning sun.  I was totally going by feel and managed to pull off a true cut down from 60, to 57, to 54 for both sets.
Tonight, I have 5 miles with 20 minutes at half marathon to marathon effort.  Tomorrow, I'm back to my slogging ways with an easy 20 miler.
Thanks to all of the folks that made the track meet happen today and congratulations to everyone who competed.  Well done! 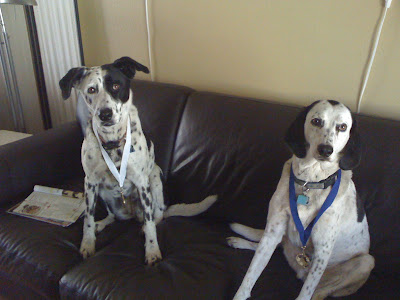 After the meet, at the awards ceremony. Buddy and Sadie receive their medals.  (The real rewards are in the camera person's hands.)
Posted by Jaymee at 2:16 PM