A man asked me the other day after hearing me perform in a concert and learning about my running success if I felt guilty for having so many gifts (he asked this just before he asked me out, so take it for what it’s worth).  I think I gave him an “awe shucks” response and probably blushed appropriately.  He is right that I have been blessed with many amazing gifts, and I cannot deny that good genes play a major role in my running success.  But, I have been awarded some booby prizes too, and I was reminded of a couple of them last week.
I completed my two-week annual military tour with the US Air Force last Friday.  During my annual tour, they do a cursory physical assessment to ensure I’m fit to fight.  The assessment includes a blood panel, and I always ask for an iron test, specifically a serum ferritin test, since I struggle with low iron stores.   I consider this tendency toward borderline anemia to be one of those genetic booby prizes.  I have posted about this previously, so if you want more details, please refer to my bitter irony post from last year. 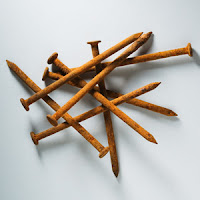 In 2007, my levels were low (12 ng/ml), and it took me about 6 months of iron supplementation to recover to the point where I felt good training hard again.  It took even longer before I was racing well.  I have been pretty consistent about taking my iron supplements, but about 6 months ago I started to take the iron every other day to see if I could get rid of some of the nasty side effects (plumbing back up, stained teeth) that come along with it.  I had my ferritin levels checked around that time and they were 27 ng/ml.  As my coach put it, they were dangerously low since the general rule is that a reading below 20 can affect athletic performance.   So, I needed to be taking more, not less of this stuff.  I was in Whole Paycheck one day and noticed that they sold a plant-based product that promised it would not back up my system like I suspected the ferrous sulfate elixir was doing.  I bought a couple of bottles and took double the recommended dosage daily.  My test results last Friday showed my ferritin levels had dropped down to 21 ng/ml on this new supplement.
While I am training well right now, this low level is likely affecting me in some way whether I feel it during my training or not.  I do know that I will really start to feel it if I drop any lower.  I have already switched back to the old ferrous sulfate elixir and am trying to eat at least one meal with red meat in it per day.  I am so grateful for having this test done when I did.  I just hope that I can increase my iron stores sufficiently as I continue to train hard over the next couple of months in preparation for the Chicago Marathon.
The blood tests also revealed that my total cholesterol is holding steady at just under 200 mg/dL (193), but my "bad" (LDL) cholesterol is over the magical limit of 100 mg/dL (104).  The good news is that my running keeps my "good" cholesterol (HDL) level high at 69 mg/dL.  I know that having higher than optimal LDL levels doesn't mean that I have a huge risk of heart disease or anything like that, but it does make me appreciate how diet and exercise don't seem to affect my LDL reading beyond a certain point.  My levels have been much higher in the past with total cholesterol pegging out around 240 in my early 20s.  But, they have never gotten lower than they are now.  One of the main reasons I originally switched to a low-fat diet (among other dietary changes) was to lower my LDL levels, and it worked.  However, they just won't seem to drop below 100 regardless of what I try, and maybe they don't have to.
I bring all of this up in the context of the discussion that's taking place regarding weight and nutrition in my blog as well as others'.  Restricting caloric intake will certainly lead to weight loss, but I have to be extra careful about getting the proper nutrition.  I track some of the nutritional components of my diet and am always shocked to see just how little nutrition is in a lot of the foods I eat, even fruits and vegetables.  Of course, when I add these nutrients up over the 2300-2800 calories that I eat daily, I generally get the recommended dietary allowance (RDA) proffered by the USDA, but that's really not saying much.  For many of these nutrients, like iron, vitamin D and calcium, I wouldn't even hit the RDA without supplementation because a lot of my vitamins and minerals come from fortified foods like Clif bars, oatmeal and vitamin water.  That's sad.  I can't imagine maintaining a hard workout schedule eating much less than I do right now.
So, I think about these things when I make food choices.  I look at the cookie under the glass at the coffee shop each afternoon and know that I CAN eat it if I want to in terms of my caloric balance.  But, I also have to question what I won't be eating that might be healthier for me if I do indulge.  The term empty calories has never had more meaning to me than it does at this point in my life.  I am certainly not saying I am a Saint when it comes to avoiding junk food, but I do recognize the trade offs in my food choices now more than ever.
This week's lab test results were a wake up call.  I was reminded that while I might be meeting my goals according to the numbers on the scale and my reflection in the mirror and even enjoying some great workouts, counting grams of carbs, fats and proteins without paying attention to the rest of the nutritional content of my diet might be doing damage to my body.  This type of damage occurs over a longer timeframe than a typical marathon training cycle.  It's also something I probably won't see until it's too late and presents itself as a random, persistent niggle or even in the form of injury, illness or disease.

"As someone has remarked, if you are what you eat, it seems the average consumer consists mostly of thickener, water, salt, and sugar."
Harvey Blatt, 'America's Food' (2008)
Posted by Jaymee at 7:30 PM