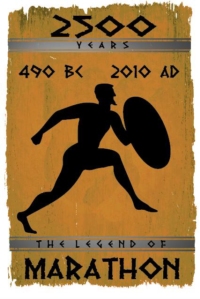 Decked out in my basketball uniform, I lined up at the start with my teammates along with runners from around the globe, readying ourselves for battle with each other and this ancient course.  My team did a little motivational huddle and, with the first gun for the elite athletes, we were off.  I ran with two of my teammates for the first few kilometers, and held a nice even 6:30 pace.  I had absolutely no race plan, no goal time, nothing.  My only goal for this race was to try to place as well as I could in the military competition but to do so without literally breaking.  I was running completely by feel.
Stray dogs paced us for these first few kilometers but quickly had race officials on their tails trying to chase them off the course.  We passed a few small towns and circled out into a lollipop-shaped, 2 km course add-on that extended the original 25-mile course into the modern 26.22.  As I entered the lollipop, I watched as the lead pack of men exited, and they were moving.
I was concentrating on staying loose and breathing easy.  Mostly, I was trying not to think about my leg pain.  Within the first 4-5 km, one of my teammates who was running along side me asked me how my leg felt.  I was very irritated with this question, though I knew she was asking out of concern for me and for our team in case I wouldn’t be able to finish.  I shot back a  curt, “fine,” but also said ”I was trying not to think about it.”  She told me she would only ask me once.  I already had a nagging ache in my left knee and did not want to be reminded of it.  I needed distraction.
Relief and distraction came as we started into the uphill section of the course a little after the 10 km mark.  The uphills actually relieved the pain in my knee.  I felt surprisingly strong on these hills and was quite happy to see that they were not the steep, steady uphill experience that I expected.  They would go up for 1-2 km and then become less steep or even flatten out for a short bit, then head up again.  I passed a lot of people on those uphills and was actually quite surprised when they ended just after the 30 km mark.  I had in my head that I needed to make it through 32 km before the downhill started.
I would find out after the race that runners unanimously struggled with the uphills and thought they were brutal.  I was just the opposite.  I felt the best on the uphill portion of the race.  I’m pretty sure this was because I was mentally prepared for worse than they were, I ran them by feel and refused to look at my Garmin or my kilometer splits while climbing.  I also think that the massive amounts of uphill training Coach Nicole had me doing for the last 3 years paid off in spades on this course.  Thank you, Nicole, for making me a strong hill runner--something I once dreaded most of all in races.
I mostly focused on hitting one km marker at a time and getting fluids and gu in my body.  It was a warm day with a 19 degree C start, but I think it cooled a bit as we headed into Athens.  I was not at all worried about the heat after my experience in Chicago.


For most of this race, I was in no-man’s land, rarely pacing with other runners.  I did find a somewhat offensive use for the European male runners on the course.  Early on in the race while briefly drafting off of a pack of sweaty, undeodorized Euro-runners, I discovered an alternative to smelling salts.  My eyes watered slightly as the powerful essence of runner BO entered my nasal passages.  It did perk me right up, while simultaneously making me throw up a little in my mouth.  I thought this strategy of drafting off of smelly men might come in handy (ala Constantina Tomescu-Dita in the late stages of the 2008 Olympic Marathon) as a sort of smelling salt effect.  I tucked that little brain child into the back pocket of my extra long and baggy shorts for use later on in the race.
As soon as I summited the last hill and started the downhill, I knew I was in trouble.  My left knee and calf were absolutely screaming.  I mean, on fire.  I was in pain with every step until my leg finally became numb and rubbery.  I started to feel concerning tightness cramp my left calf.  I breathed into the tightness with hopes of averting a race-ending event.  By this point in the race, I knew this was the terrain I had to battle for another 6 miles, so I better just suck it the hell up and press on with pride.  The supportive, calamitous crowds along the course saved me in the last 10 km.  I absorbed their energy and kept going.  I needed the distraction of the little kids standing on the streets with their hands out waiting for someone to slap them.  I slapped every hand I passed.  I waved and pumped my fist as the crowd cheered me on to my own personal victory in Athens.
I could not believe the support for me in my USA-emblazoned uniform on this course.  In the Belgrade Marathon in 2009, my Team USA outfit was met with calls from the crowd that “USA (pronounced oo-sah) sucks” and “Bush sucks.”  In Greece, I was a superstar.  Chants of “U-S-A! U-S-A!”, “Bravo oo-sah or (yoo-sah)”, “Bravo Bella”, and “Bravo America” were yelled from almost every crowd lining the streets.  The crowds were unexpectedly big and loud in numerous locations along the course, increasing in volume and intensity as we entered the city of Athens.  I was so proud to represent my country running in this race as I heard these cheers over and over.
Around the 36-37 km mark, I looked ahead and saw another female runner.  This gave me something to focus on since I hadn’t seen another female runner in the last 25 km or so.  I was now starting to hammer the hills. I was running most of my km splits in the 6:20-6:30 range and I was gaining on this gal.  As I got closer to her, I noticed it was one of my teammates and my heart sank.  That was not the person I wanted to see coming back to me.  I was now really concerned since she is a super strong runner (2-time Olympic Trials Qualifier) and the strongest runner on our team.  It took me a couple of clicks to catch up to her, but I passed her quickly and told her that she looked good and strong.  I knew that, if I were in her shoes, I wouldn’t want someone to linger and dote on me.  It’s your own personal struggle at that point and you need to focus on staying in the game.
I picked up the pace even more as the crowds cheered me along toward the finish.  I watched km markers 38 then 39 pass and knew that I was going to at least surpass Pheidippides‘ run once I passed the 40 km marker.  I was so focused on keeping my legs moving and not letting the rubber chicken feeling get the best of me.  I wanted to finish.  I wanted that finishers‘ medal.  I wanted to turn in a strong performance for the USA.  With 2 km to go, I knew I would finish, even if I was reduced to walking.  I also knew that, if I stopped running, I would not start up again.  I was afraid I might collapse at the finish line.  I kept pounding down the hills, around the corner, and then, finally, into the entrance of the Panathenaic Stadium, a structure first built in the 3rd century BC and most recently restored for the 1896 Olympic Games.  I entered the stadium and the crowd roared.  I had a wall of male runners between me and that finish line.  I kicked it into a gear that I had no idea I could find in the last 100m of a marathon and passed the guys standing still.  The crowd loved my sprint finish, and I truly felt like a hero crossing the line in 2:58:46.  I stopped running and braced for collapse.  It didn’t come.  I gave a little “thank you” to my legs as they walked me away from the finish line in one piece.  I had survived my Battle with The Marathon.

I was ushered off to the left immediately and sent into a cave.  It was literally this steep, marble encased tunnel that I imagined saw ancient athletes grace its walkway before and after ancient Athenian games.  I felt it was a cruel challenge for marathoners to have to climb following the race, but I was relieved to reach the top, have someone unlace my shoe to remove my timing chip and get my sweet finishers‘ medal.  Soon, the rest of my team joined me, all of them having run strong races and achieved excellent times.  We met up with our USA mens' team and found out they had both run under 2:30 on that course.  We enjoyed chattering on about how tough the course and race had been.  Joanie ended up finishing the race in 3:05 or there abouts.  She ran in to the finish with one of my teammates and raised her arm up in the air as they cruised along the track in the stadium to a roaring crowd.  This was a thrill for my teammate, Sue.

And the Gold Medal Goes To...
The closing ceremonies for the 43rd Military Marathon Championship race were held on Monday evening back at our base station in Nea Makri.  For the third world championship marathon in a row, the American Women's Team took the gold medal.  This is an especially gratifying and moving achievement in that only the team awards are given out at the event and the winning team's national anthem is played.  We stood atop our podium (all three of us on a very small step) and saluted as the Star-Spangled Banner played.  I have to admit to a few tears rolling down my cheeks as I breathed in the fresh marine air and the significance of this moment.  While I had sacrificed my legs in this event to lead the team to victory, that moment made it all worthwhile.

In case you think that this competition was full of military slackers, the men's competition was even more fierce.  The winning team from Poland had a combined time of 6:48.  That's right, 6:48 for three team members, which equals a 2:16 average pace.  Their lead runner was in his 40s and ran a 2:15.  The next fastest military mens' team had a paltry 2:20 average.  Crazy fast.
The Day After...
I could hardly walk without excruciating pain.  The good news is that pretty much everyone else was in the same boat.  The bad news was that Monday was our "cultural day" and we would be walking, mostly limping around the city looking at the fantastic ruins in the middle of the city of Athens.  I am now on the beautiful, remote island of Santorini enjoying some run-free relaxation.  I have a few weeks of healing to do before I start back into my training.  In the mean time, I plan to fill my gut with good Greek food, drink lots of wine and get fat on life, enjoying the memories of this fantastic adventure.
Congratulations to all of the brave participants of the Athens Classic Marathon. Special thanks to the organizers of the Athens Marathon for a fantastic event and the Conseil International du Sport Militaire (CISM) and our Greek hosts for creating a truly extraordinary experience.
Posted by Jaymee at 2:34 PM