When your nose is so close to the paper, you quickly forget that what you're writing is a novel and not just one word at a time. ~Me
I always find it interesting to come out the other side of a major experience or event and look back on the craziness that preceded it.  Of course, when I'm part of the craziness I don't realize how skewed my life is.  After running two marathons and having two of the most amazing experiences of my life, it's nice to finally settle into a lifestyle that feels somewhat normal again.

I haven't run since Athens.  Maybe I should say that I can't run right now.  Normally, I would be scratching at the cage, raring to get out and run.  Instead, I am perfectly content letting my body rest and heal.  This is part of my new perspective.

I made a rookie mistake after Chicago.  I did not respect the recovery that my body needed, and it rebelled in a big way.  I think I was equal parts drunk on my major accomplishment and tired from the stressful months that led up to the race.  As happy as I was that I had reached my goal of qualifying for the Olympic Marathon Trials, I was also relieved that I could rest for a bit.  But, I had another marathon to run 3 weeks later.
Instead of sticking it out for another 3 weeks and doing everything I could to allow my body to recover while maintaining my fitness, I short-sheeted the recovery bed.  I did nothing to aid my recovery after Chicago: no stretching, rolling, massage, ice baths.  Nothing.  Huge mistake.  I did however, start running again to keep up my fitness.  My body finally revolted during my long run the week before Athens.  I THEN tried stretching, rolling, massage, but by that time, it was too late.  You know how that story ended: a Pheidippidel assault on Athens and lots of post-race limping.
Lesson #1:  Respect recovery.
What I didn't take in recovery post-Chicago, I am taking now, and I am not the least bit sad about it.  I don't have that panicky feeling like I might be losing fitness right now because I'm not out there running.  I know I can cross train and maintain my fitness.  It's also kind of fun getting out on the bike and riding along the American River Bike Trail, seeing my old friend, the somnambulist lifeguard, at the local YMCA pool for my early pool run and reading e-books on my iPad on the elliptical at the gym.
I told The Genius in Athens, as I was paying little attention to what I was shoveling into my mouth, that I was going to let myself get fat.  He flipped his head around to look at me, and I saw a flicker of panic in his eyes.  I explained, "...relatively fat.  Like 2 pounds." Relief.  My point was really that I needed a break from the diet bookkeeping and the worry about not getting enough carbs, eating too much fat, getting enough nutrients and general fretting about being lean.
My Chicago Marathon experience actually taught me an important lesson about my previous conclusion that leaner = faster.  I think this is still true, but each of us has a personal limit.  As it turns out, I was about a pound heavier and slightly less lean going into Chicago than I was when I ran the Twin Cities Marathon the year before, yet I was fitter and ran much faster.  This wasn't for a lack of trying either.  I felt like I was pushing my lower limits in terms of caloric intake leading up to Chicago, but I just wasn't losing weight.  About a month out from the race, I abandoned my pursuit of a lighter physique and upped my calorie intake for fear of becoming either injured or sick.  That was the right move.
I have not tracked my caloric intake since Chicago and am quite happy about it.  I imagine I will continue to be happy until I notice the buttons on my jeans popping or people commenting on my Swiss genes again.  I don't have any factoids to back this up, but it just feels like body fat is a good thing to have around periodically.  At some point I'll bust out my iPad and get back to recording my food intake.  For now, I'm enjoying the mental break.  And the chocolate.
I don't have a training program yet with my new coach since we're focusing on healing, but I have set my first race for 2011.  My 2:45 marathon qualified me for the National Half Marathon Championships in Houston in late January.  I mentioned to Coach Tom that I was interested in running this but recognized that I won't have time to get into peak shape for it.  He agreed that the experience would be amazing and that I should go for it.  I don't necessarily expect great things in that race, but I also realize that the opportunity to compete in a National Championship race is very rare.  Last year, Shalane Flanagan won the race in her half marathon debut.  I will probably come in close to last, but I don't mind being close to last in a race against the best in the country. 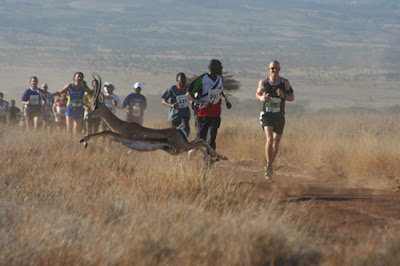 I have also put a bug in the ear of The Nature Conservancy President and CEO, Mark Tercek, about landing a spot on a TNC staff team running the 2012 Safaricom Marathon.  He just ran his first marathon in 20 years at NYC and mentioned in this post on Treehugger.com that he plans to lead a team of TNC staff in the Safaricom marathon as a fundraiser for the Lewa Preserve in Kenya.  This is an amazing race that has you running in this huge nature preserve amongst wild animals on dirt paths.  As a grassland ecologist and a runner, this would be the most amazing experience I can imagine and the type of fundraiser that I could really get behind.  Mr. Tercek said I had a spot on the team if I wanted it, so you better believe I'll be reminding him of that!
Posted by Jaymee at 9:46 AM