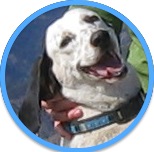 I lost one of my best friends on Monday of this week: my 10-year-old Coonhound, Buddy.  The thoughts of the happiness Buddy brought to my life are just beginning to supplant my sorrow, but I wanted to honor Buddy by filling this space with memories of his happy soul.


Buddy came to me from Yuba City, California.  I saw him on line when I was looking to adopt a companion for my rambunctious puppy, Sadie.  From his dogmatch.com photo I could see he was beautiful, mostly white with large black spots on his body in all the best places.  When I contacted his foster dad about him, I said I was looking for an energetic companion for my other dog.  I could sense the reservation in his email response when he said that Buddy might not be the best guy for that job.
I learned that Buddy had been found wandering the streets of Yuba City and was nearly starved to death.  I believe Buddy might have been owned by a hunter originally.  The problem was that Buddy was terrified of gunfire.  I suspect he ran off after shots were fired never to be found by his owner again.  Or maybe he was dumped off somewhere when his fear was discovered.  Buddy had separation anxiety that eased over the years but never quite went away.  When his foster dad took him in, he weighed 35 pounds.  He got Buddy up to 55 before I became his dog mom.
The picture on the right was taken the day I adopted Buddy and the day he first met Sadie.  From the very instant they locked paws, they were inseparable.  I love these pictures from that first meeting because they so vividly capture the joy in their doggie eyes.  The two of them spent no more than 5 days apart from then on.
Nobody really knew how old Buddy was, and you certainly couldn't tell by the way he acted.  When I first adopted him, people would say, "Oh, look at that nice old dog," to which I would respond, "He's one."  He had a predictable, easy-going temperament and that's what endeared him to everyone he met.  Buddy loved to dance.  He greeted everyone he met by rearing up on his back legs and gracefully falling forward, trusting that his partner would grab his paws and engage in his waltz.
Buddy was remarkable in that when his nose took over his body, he had the energy of a new puppy, even up until a couple of weeks before he died.  As a scent hound, he was a slave to his nose.  When I took him out where I could let him run free, his nose would turn on and his ears would shut off.  You would hear his hound dog bay in the distance for what seemed miles away.  I would call his name until I was hoarse, but he wouldn't return until he was done with his job.


Buddy loved to go for car rides and became ecstatic when he heard the word Bu-bye from me.  He really didn't seem to care where we were going, he just didn't want to be left behind.  For a while, I had a VW Vanagon that I got specifically for my dogs, so I could let them lay down in the bed in back and snooze while we took off for some grand adventure.  We went on many camping trips in that van up until I sold it this last summer.
One of my favorite camping rituals was our annual Thanksgiving trip to the Capay Valley here in California.  There is a small campground near a challenging trail that leads to the top of Fiske Peak in the Blue Ridge Mountains.  I started taking the dogs there for Thanksgiving in 2003.  We would hike to the top of the peak, sign our names in the 'guestbook' stored in its protective glass jar, and then head back down.  Buddy always led the way up and down the mountain.  He also ran more than three times what I hiked, chasing anything that he could track.  At the end of our day, the pups would lay in the creek to cool themselves down and I would take them to McDonald's for a cheeseburger on the way home.
Buddy was a very gentle soul and loved everyone.  His personality was in stark contrast to his sister, Sadie, who likes few people and even fewer dogs.  When we would encounter kids that wanted to pet my "dalmatians" I would send Buddy in as the greeter.  He loved kids and would gladly roll over anywhere and let them pat his belly, scratch his ears or even pull on his tail.  He didn't care.  The video above pretty much exemplifies Buddy's personality.
Buddy was afraid of bed snakes.  He would sleep on my bed at night before I would get into bed.  But, when I went to get under the covers, the bed snakes would start moving toward him and his eyes would become saucer-like as he leapt off of the bed and headed to his futon in his room.  He would remain curled up on his futon until he heard me stir in the morning.  I could hear his little doggie nails on the wood floor clicking as he made his way into the bedroom and settled in next to me on the bed, waiting for his daily morning feeding and walk.

There has always been some question about Buddy's intelligence.  His pal Sadie can without question do calculus in her head, but Buddy always acted like a simple boy.  I now know that this was truly an act.  For example, Buddy was a mastermind at getting food off of counters when I would leave anything within Buddy reach.  Sadie no doubt got most of the spoils of his efforts but his climbing skills were certainly a benefit to them both.  Just a few months ago, I noticed that we were going through cat food like crazy, but the cats didn't seem to be gaining a proportionate amount of weight.  I was laying in bed one morning when I heard a clanking in the cat's room and walked in just as Buddy was exiting the convenient staircase I had given him to access the cat food.  I wondered how long he had been at this.  Clever boy.

Buddy loved to run and could go for miles and miles without tiring--as long as there was a scent to follow.  On a leash and at my side, Buddy lagged.  When I ran with my dogs, I would feel a little contorted with Sadie pulling on the leash moving forward, and Buddy dragging on his leash from behind.  I think buddy just wasn't built to be a hobby jogger.  His true running talent was reserved for the times when he needed to get a move on.
I still see Buddy on a daily basis when I walk past my bedroom and glance at the pillows where he would make his nest for his daily naps or on the futon where he would lay curled up at night in his room.  His hair still carpets the floor of the house and forms Buddy bunnies in the corners of every room.  I can't bring myself to vacuum it all up just yet.  My life will indeed go on but in a way that is richer for having loved Buddy. 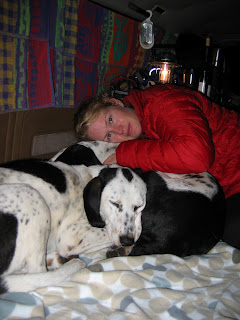