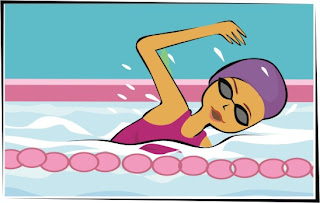 I find it hard to believe that someone actually used this term to describe me in relation to my swimming abilities.  The words graceful and smooth were also thrown in there.  I thought this might be a fluke until I heard it again, and then again from complete strangers.  I’m not sure when or where, but at some point in my life (perhaps a previous one), I learned to swim.
In my last post, I reported practically drowning the first time I strayed from my pool running routine and attempted to actually swim—without a flotation device.  I was pretty embarrassed after that but was also somewhat intrigued by the challenge.  For a couple more weeks, I kept tacking on 10-15 minutes of swimming at the end of my pool running.  Then, pool running was taken away from me as a form of cross training because it was aggravating my illitobial (IT) band.
With my cross training options dwindling, something miraculous happened when I gave swimming just a little more practice.  I became good at it, and it became fun--pretty much over night.  I have worked up to swimming (mostly the crawl stroke) for an hour straight and typically don’t want to get out of the pool at the end of the hour.  I feel awesome after a pool workout.  Granted, I’m not going fast yet.  I’m simply swimming steadily, lap after lap.  I have even advanced to the “Michael Phelps” breathing pattern of one breath every 4 strokes alternated with two to one when needed.  I can even do a flip turn.
Oh, right.  This is supposed to be a blog about running.
Well, I have not run for nearly 10 weeks now.  I have attempted to run to test my IT band, and I still have pain on the outside of my kneecap that tells me that I’m not fully healed.  Someone asked soon after the Athens Marathon (where I did this damage) whether I regretted running it.  I joked, “ask me in a month when I’m still not running.”  Prescient, I am.
It’s now been more than two months since I incurred this damage, and I still don’t regret it.  There have been some mighty lows in this injury roller coaster ride, but it has also been rejuvenating.  When I feel really low, like I’ll never be able to run again, I feel sorry for myself and wallow.  But, those times have been few and far between.  Mostly, I remind myself that I haven’t taken a major break from running in 6 years, have run 17 marathons and countless other races in that time and just qualified for the Olympic Trials.  A 10+ week break is merely a blip.
This injury cycle has made me look at myself differently too.  Whereas I used to call myself a runner, I now realize I am more than that—I am an athlete.  I have chosen to concentrate on running as my primary sport, but I enjoy being fit.  I enjoy working out.  I like trying new things and becoming better at them.
The future is still unknown.
I’m not sure anyone aside from the Miracle Worker and me fully appreciate just how much damage I did to my leg during the Athens Marathon.  It honestly doesn’t surprise me that I’m still recovering, though that doesn’t mean I like it.  I think it’s kind of funny that, last fall I was questioning whether or not I was tough enough to handle the pain of running.  I guess I am pretty damned tough—maybe tougher than I should be if I want to run injury free.  The thing I do know is that I do not want to run with pain.  I will take whatever break is needed to get there.  There is no glory in running through pain.
A couple of weeks ago, Lino (aka Miracle Worker) took a look at my leg and told me it was time for a cortisone shot in my IT band.  Coach Tom concurred with this.  While my quad muscle is healing nicely, the IT band has been in a constant state of inflammation and needs intervention to break that cycle.  Lino explained that there is so little blood flow to the IT band that it is really slow to heal.  The inflammation at this late stage in the game further inhibits the healing.
I was lucky to be able to get an appointment through my HMO for yesterday to get this done.  The shot was not very painful, but the injection site is still tender.  I have easy cross training planned for the next couple of weeks with a few trial runs, including a short (1 mile) run tomorrow.  I hope that pain and running will no longer be linked for me in the near future.  I promise to keep you all updated on my progress.
Happy New Year!
Posted by Jaymee at 1:57 PM