Hello again!  I know it's been a few weeks since my last post, but I promise I've been busy training.

When I last left you, I was in the middle of a racing frenzy.  I had decided to run 4 races in 4 weekends to work on my racing skills and try for a PR.  I came very close to that PR in my first 5k back, had a fantastic cross country race the next weekend and then had a stinker of a race the 3rd weekend.  I felt like hell before that 3rd race and pretty much knew it was going to stink.  I reevaluated my racing plan and decided to take a down week last week.  I had planned to take that down week after my first 5k, but I decided to race instead.  I knew after my poopy race that it was the right time for a bit of a break. So, I cross trained two days and ran easy the rest for a total of 36 miles.  I am very glad I took the time down.

I've been thinking a lot about numbers lately--the jumble of numbers typed above in particular--which represent my longest run to date, my percent body fat, the number of pounds of body fat I own, my mileage this week, my weight, my serum ferritin levels, my LDL levels and my total cholesterol, though not in that order.

The Friday before my last race, I had my blood tested for iron and cholesterol levels.  I had not had either checked in a year.  The cholesterol test shocked me.  My numbers were the best they have ever been with total cholesterol way under 200 and an LDL level under 100.  While my total cholesterol has hovered right around 200 since I was 21 years old, my LDL levels have always been high regardless of how much I exercise.  I always assumed that, if I stopped watching my saturated fat intake, my LDL levels would balloon.  I stopped tracking my fat intake a few months ago and have been eating as much as I want.  So, I really expected to see a big number for my cholesterol.  This was a good surprise, but one that I can't easily explain.

My not so good surprise came from my iron levels.  They were the second lowest they've ever been including ferritin, hemoglobin, hematocrit--the whole shebang.  This should not have been surprising since I stopped really paying attention to my iron intake while I was injured.  I now know I can't get away with anything less than 1 tbsp. ferrous sulfate elixir taken daily with orange juice.  I hate the taste and I hate the back up that this stuff causes.  But, low energy from low iron stores is for the birds.  I'm back on supps and should be back to feeling high energy in a few weeks.  This is likely why I felt like poo in that third race and why it's taking more time to recover from the three weekend racing fest.

I have had this fantasy running for a few years now where I lose a couple of pounds each year and that translates into faster marathon times.  It is a fact that carrying around more weight than you need slows you down.  Since my weight has never gotten down to anything resembling too low I have always seen room for loss.  I track my weight and body fat levels with a home scale, recognizing that the body fat measures are going to be inaccurate but fairly precise.  I had my body fat measured with hydrostatic testing back in 2006 when I first started running, and it was around 13%.  I have lost bulk since then, so I retested last week and was shocked to find out that my body fat is pretty darn low.  According to most articles on the internets on this subject, menses should have ceased long ago and my brain should be a small nubbin rattling around in my head.  Neither is close to happening.  My body fat percent is low because I have a lot of lean body mass--approximately 14 pounds more than THE MAX of the normal range for my height according to the chart the testing clinic gave me.

This information has knocked me for a loop.  I thought I was going to lose about 2-3 lbs. before Houston, and that isn't going to happen.  I am about the same weight and body fat reading (measured on my home scale) as I was before Chicago last year, so I have definitely been in this body fat range for a while though I do pop back up quickly after a marathon.  My body functions quite well, actually.  I hardly if ever get sick.  I can remember maybe 2-3 workouts in the last few years that I totally bombed.  I typically have very high energy levels (when my iron levels are right!).  Clearly the only way that I will lose weight is if I lose lean mass.  Since I'm not a candidate for femur reduction surgery, that means atrophy is the name of the game (if only you could select where this occurs!).  I stopped doing any form of weight training about 6 months ago, so that should help me at least not gain any more lean mass.  Regardless, I carry around a lot of upper body muscle.  My new model for upper body physique and strength is Monty Burns.  I won't stop my upper body atrophy until I can lift as little as Monty.  The Genius has agreed to be my Smithers--carrying sacks of dog food and groceries for me. 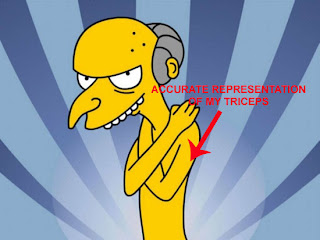 So, this just means that I can't count on carrying around less weight in order to get faster.  I have to get fast the old fashioned way--lots of miles and hard work.  To that end, this week marked the first week of my build up for the Olympic Trials race.  I don't officially start my marathon training plan until the first week in October.  I'm trying something completely different this time around and am excited about it.

In my next post, I'll show a cool new tool I've developed to track every single aspect of my running life.  Ah, the geek emerges again!  "Smithers, release the robotic Richard Simmons" MB!
Posted by Jaymee at 10:34 PM