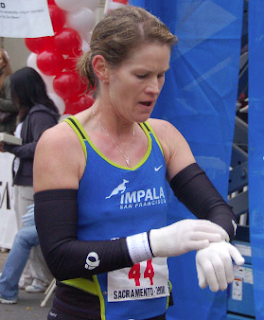 I am fascinated by the prevalence of superstitious behaviors in modern sport. Why is it that a highly-trained super athlete can put in countless hours year after year practicing their sport but is convinced that the dried up jerboa tail given to him by a Mongolian shaman that he carries in his shorts pocket is what gives him the edge on game or race day? One might predict that the prevalence of superstition in the modern world would decline as our ability to explain natural phenomena through science increases, but that doesn't seem to be the case. Perhaps the old adage, "the more you know the more you realize how much you don't know..." explains it.
As I mentally prepare for my marathon next week, I find myself curiously drawn to superstition's doorstep. I am not normally very superstitious and don't have a special pair of underwear or a 10 lb. gold chain that I generally save only for the special races. But, I do have a few things that make me feel special on race day, and last week, I added one more to my collection that will make its debut in Twin Cities. I guarantee nobody else will be sporting anything like it (unless they read this post and go out and buy one, though a certain amount of torture with needles will be required).
I did a little bit of research about the use of talismans and ritual in sport and found that I am in good company. Some get their comfort from ritual. Take Major League slugger Wade Boggs' 'Rainman' approach to game prep, for example. He is famous for taking exactly 150 ground balls in practice, going to batting practice at 5:17 p.m. and running sprints at 7:17 p.m. He also ate chicken before every game and drew the Hebrew word Chai (meaning life) in the batter's box before each at-bat. Boggs retired in 1999 and was one of only a few dozen players to reach 3000 career hits. Was it the chicken scratch or was he just a damn good player?
Then there are the clothing and personal hygiene tricks that athletes rely on for important games and races. The successful pro surfer Aaron Cormican wears a lucky pair of shorts he calls "eye of the tiger" when he competes simply stating, "I win when I wear them." The "playoff beard" is a hockey tradition where players put off shaving throughout a playoff run. It is thought to promote a warrior mentality and single-minded focus. Olympic marathoner Brian Sell similarly sports a pair of signature chops on race day for good luck. Baseball player Moises Alou would pee all over his hands before going up to bat instead of wearing batting gloves.
Finally, many athletes sport special jewelry, hair clips and other charms for good luck. Probably the most widely noted article of good luck jewelry right now is Kara Goucher's Titanium Phiten necklace. She got the idea from her hero and nemesis, Paula Radcliffe, who has been seen wearing one of these for years in every race she runs. Kara also has a special pair of red, white and blue hair clips given to her by a friend that she wears for good luck.
Superstitious behavior is probably just in our nature. Psychologist B.F. Skinner found that he could create superstitious behavior in animals by using the regular dispensing of food as a trigger. The animal would eventually develop a pattern of behavior. For instance, if it just happened to lift a foot when the snausage came out the chute, it believed the foot lifting was responsible for the treat. Sporadic reinforcement is all that's necessary (say, treats received when lifting foot 1 time out of 10 or even 100) to maintain the ritual behavior.
Dr. Jack Daniels actively tries to break his athletes of their superstitions. In his book Daniels' Running Formula, he says, "To break a runner from relying on good luck charms, I try to set up a certain success situation and then find a way to hide the runner's secret victory socks. If you can be victorious once in the absence of the good luck item chances of future success without it are improved. The day will come when you forget or lose your good luck charm, and if that day happens to be at the Olympic Trials, well, that's really bad luck."
Sorry, Dr. Jack, I am keeping my lucky charms. I have a silver necklace (pictured around my neck above at CIM) that I have worn in every race since I bought it about 2 years ago. CIM was the race that reinforced this superstitious behavior. The charm is comprised of three little tags with the words "hope", "believe" and "dream" written on them. My goal with this good luck piece is just to blacken it with the sweat from as many races as I can before it falls apart.
I found my newest charm, the one I'll be sporting in Twin Cities, at a store known for its one-of-a-kind ancient Chinese artifacts: Claire's. It's a nose stud that has the Chinese symbol for luck (and I checked to make sure that's what it meant, worried that it might be something else that ended in u-c-k, which would be bad) on the stud. It's awesome, and I can't wait to see what kind of magic juju it will infuse into my race legs next Sunday. Good luck, indeed.
Posted by Jaymee at 1:05 PM