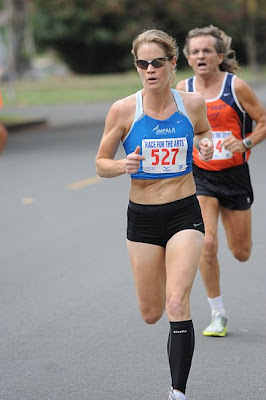 Back to the charts: I have detailed the significant events that have occurred during this last year: CIM was in early December and I was hovering around 128 lbs. I marked the entrance of the Dissin' Genius mostly because it was a memorable event. I'm not suggesting that the weight creep that comes directly after our first encounter has anything to do with The Genius' presence, however. As you can see in this cycle, my weight took a serious nose-dive when I was unable to eat after my dog Sadie went to jail, and I never gained this weight back. Finally, we are now in the phase where Jaymee is running in the heat for nearly every run with weight approaching 124 lbs.
Anytime a female runner talks about weight there is a quiet hush that fills the room. Does she have weight "issues"? It's a fair question considering how many female (and male) runners are afflicted by eating disorders. I was shocked to read about Tera Moody's battle with anorexia when she was back in college. She went from 5'8" and 128 lbs down to 96 lbs in a matter of months! I was watching a track meet a few weeks ago and noticed that Kristen Wurth-Thomas had trimmed down a bit. The commentator said that her coach had given her an ultimatum: either lose 5 lbs. or he would retire her. Retire her? What is she, a race horse? It's a cruel world out there, but there's no escaping the fact that less weight equals faster times--to a point. 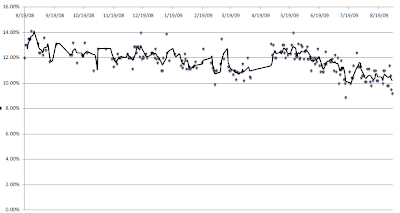 My coach pointed out to me when I first blogged about this that I should not be so concerned with weight loss in general but should really key in on losing body fat. Losing muscle can hurt your running but body fat is completely useless (well, a small amount is important). I believe I have managed to maintain that balance as my body fat chart follows roughly the same pattern as my weight chart showing about a 2% loss of fat since CIM.
So, I'm getting close to my fighting weight, feeling good and ready to start my taper next week. Twin Cities, here I come!
Posted by Jaymee at 3:31 PM