PR Party with the Buffaloes 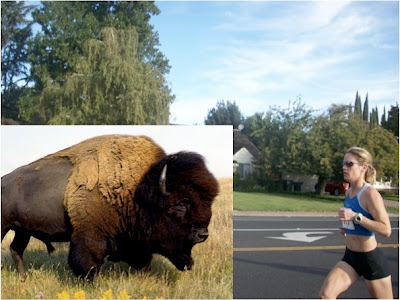 Today's race was not the best that I've ever had, but it was also not the worst. Starting with the good:
Now for the bad and ugly:
The last (and only) time I experienced a side stitch in a race was the Zoo Zoom 10k back in 2007 before my first Eugene Marathon race. My ex-coach had me primed for a sub-40 minute race at the Zoo Zoom. The side stitch hit me late in mile 5 and stopped me in my tracks. I had never had anything like this happen to me before, and I was not quite sure what to do. So, I stopped to catch my breath and desperately began pushing on my gut in various places to get rid of the awful pain. I lost about 1 minute to the stitch, but I did finish the race, in over 40 minutes though. I did days of postmortem stitch research and came up empty handed. Seems nobody really knows what causes them short of an angry competitor stabbing your voodoo doll in the gut with needles. I wasn't ready to try the lead shot and lard palpation treatment recommended on one website, though I'm half tempted now. 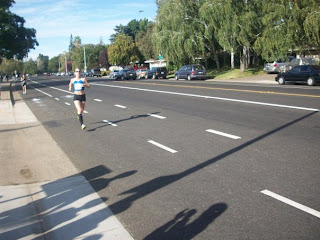 So, when this stitch hit at mile 9, I was bummed out. I was having a good race up until then. I started out at a reasonable 5:58 pace for the first few miles. My teammate caught me after the first mile and stuck right to my tail. It was good to have someone pushing from behind, but it would have been nice to have someone blocking the wind in the front. I believe we were headed directly into about 10 mph headwinds for at least half of the race, but the temperatures were perfect. I lost my teammate when she pulled ahead just before the turn around at some unspecified point in the race, and she put about 15 seconds on me just like that. I only saw a total of 4 mile markers the whole race at miles 1, 2, 3 and 9. I'm having a hard time deciding whether that was good or bad. It did make me rely on my Garmin a lot more for my pacing, and, of course, it showed I was right on target pace at 6:00 the whole way.
I had some mantras flying around today that seemed to work pretty well. Batty had a cross country race yesterday in Golden Gate Park where I volunteered, and she told me about a few of her mantras that she uses. The one I used today was, "rock n' roll, you're in control." It worked for a little bit. I started feeling strong right around where I imagine mile 7 would have been, and I started a new internal chant, "Don't count me out yet. Don't count me out." I started gaining on my teammate. I was closing the gap! I saw Batty cheering. I saw the mile 9 marker. Then, wham: that's when the steeotch hit. I was very proud of myself for hanging in there in that last mile where I lost about 15 seconds to the stitch. Oh, how I wanted to stop and walk it off!
I am going to get certain Buffalo Chips all lathered up for saying this, but after the Race for the Arts 5J experience, I feel a special obligation to report on race distance. This race is notoriously long and today, just like in 2007 and 2008 when I ran it, it came in at 10.10 miles. Others reported Garmin readings of 10.08-10.11. I did everything possible today including running in the center lane to try to run the shortest possible route, and I still came up with 10.10. I have to say that I go into this race knowing it will be long. The race organizers, after all, don't have an obligation to make it shorter. They just have to make sure that it is not too short. I am not complaining here, just stating the facts.
On a beautiful Sunday afternoon, I sit here with a cup of Joe, a belly full of sushi and my calves happily swaddled in their compression casings feeling pretty happy with the day's 22 miles and the end of another 80+ mile training week on the road to the Twin Cities Marathon. Congratulations to all of the fierce buffaloes getting it done out there today!
Posted by Jaymee at 1:45 PM