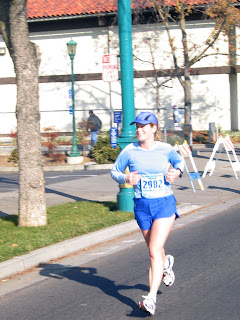 At around this time of year in 2005, I was busy assessing my running goals for the new year.  At that point, I had been running for 16 months and had four marathons under my belt.  In a year's time, I had shaved 20 minutes off of my marathon PR and was pretty excited about my progress.  I had just run 3:20 at CIM and had averaged 26 miles over 4-days per week in 2005.

I look back on this time because it was when I first decided to shoot for an Olympic Trials qualifier (OTQ).  I found the first documentation of this goal in an email from Jan 3, 2006 sent to Batty, now one of my best friends and early girlie training partners.  Here's what I told her:

I'll be focusing on bringing my marathon times down which will in turn mean faster 5k, 10k and 1/2 marathon times.  I hope to run a sub-3 hour marathon by Chicago in October and/or CIM in December.  In 2007, my goal will be to run a sub 2:50 marathon and try to qualify for the Olympic Trials.


That's right.  I just ran a 3:20 marathon and am ready to try to give an OTQ a shot.  Really?  My personal records at that point in other distances were no more indicative of my potential than my marathon:

I find this fascinating because I really can't recall why I ever believed, as a middle-of-the-pack marathoner, I had the potential to run as fast as I eventually have.  I think in the beginning I was just doing the math:  I shaved 20 minutes off of my marathon time in 1 year, so I only needed to shave another 33 minutes off of that time in 2 years to qualify.  Easy.  Ah, the ignorance of youth.

Even more impressive is that I was getting support from coaches and fellow runners.  I kept this goal as a little secret, testing it out on a few trusted running friends.  When they didn't laugh in my face (though they may have rolled their eyes and twirled their finger around their ear after I turned away), it gave me hope.  As I told more and more people about my crazy goal, I became more and more confident that I would get there.

Maybe I was waiting for someone to tell me how unrealistic it was for me, a woman in her late thirties, with less than 2 years of running under her belt, to even dream about running that fast.  That never happened.  Instead, I had three coaches during that time period that believed in me and consistently told me that I could do it.  One said this in Feb, 2007: "But if you aren't ready to run 2:47 within 12 months, I'll be very surprised, and if you can't do it within 3 years I'll shit in my hat and eat it, as the saying goes."  Lucky for him, I ran 2:46 within 3 years.

Of course, I didn't run under 2:47 in time for the 2008 qualifying window.  My fastest marathon time leading up to April 2008 was 2:57.  I gave it everything I had and my coaches worked their hardest to get me there.   After I ran the 2:57 in Eugene in 2007, I had a rough year recovering from low iron stores.  I kept training hard with my eye on that sub-2:47 and basically chased the qualifying time in a couple of marathons before realizing in the winter 2008, that I wasn't going to get there.

Why didn't I give up then?  Again, I don't know.  I felt like I had plateaued from April 2007 to November 2008.  I was whittling away at all of my PRs, but they were going down by a few seconds here and there, it seemed, rather than the leaps and bounds I was used to.  I found this to be a very difficult time to continue to train hard and to believe.  In some ways, I felt like a fool for ever having believed I could run under 2:47.  Worst of all, I had told all of those people what I was trying to do and had to face the cold hard fact that I didn't even come close.

This year, I finally ran under 2:47.  While I still didn't qualify for the Trials, it felt so great to see 2:46 on that clock at the finish line, I didn't really care.  I had believed that I could run that fast for four years and had finally proven to myself that it was possible.

The moral of this story, if there is one, is: to achieve remarkable things you first have to picture yourself doing it which means truly believing that you can.  And, you're much more likely to get there if you surround yourself with people that believe in you and motivate you to achieve that goal.

So, maybe I should set my sights on that A qualifier for 2012?  I only have to shave 7 minutes off of my marathon time, and I have 2 years...  This is how it begins.