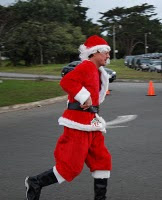 ...in the Christmas Re-e-lays!  Early Sunday morning, I drove to the SF Bay area to compete in the Christmas Relays for my racing team, The Impalas.  One of four masters runners on our relay team, I was responsible for running one, 4.5-mile loop around Lake Merced.  Technically, I was supposed to be running this as a workout.  My coach put it this way in my schedule:
I assumed this was going to be a low key event, so running it as a workout would not be a problem.  I disclosed this to my teammate when I signed up for the race, so I felt like I had set the bar appropriately for my performance.

I am seriously navigationally challenged and get lost everywhere I go (except, apparently, in China, but that's a  different story).  So, it was no surprise that I got lost on my way to the Relay venue.  I had great directions, but I just got too confused looking at them while driving.  While I had planned to arrive an hour early, I finally arrived at Lake Merced at 8:30 and was scheduled to run the first leg of my relay starting at 9:00.  By the time I parked and walked the 1/2 mile to the team tent, I was left with only 20 minutes to the start.  I really had to go pee and pee takes priority.  So, I got in line behind about 50 people, getting completely soaked waiting in the pouring rain for a free john.

I now had 10 minutes to get my racing gear in order and get to the starting line, which left no time for a warm up.  I reminded myself that this was just a workout, so I could warm up during the first mile.  Then, my teammate running the 3rd leg of my relay told me that she was nervous about her performance.  She went on to tell me that our team was tied with the Tamalpa women's masters team at 113 points each after about a dozen races in the Pacific Association grand prix. This race would decide which masters team won the 2009 title.  A twinge of guilt coursed through me at that moment concerning my plan to run slower than race effort.  But, I decided I needed to be true to my coach and follow my workout plan.  I was just keeping my fingers crossed that LT effort would be faster than what the other team was running.  I changed into my racing gear, left my trainers on and toed the line with a number of other jolly runners.

The first mile was up a gradual hill and I knew I was going out pretty hot when I was keeping up with some of my fast teammates.  I decided to wear my heartrate monitor for the race and looked down to see that my HR was up in the high 180s!  I was super excited.  I might just see a max heart rate here today!  It didn't dawn on me that I was running a lot harder than LT effort, doing about 5:30-5:45 pace up the hill.  As soon as we hit the downhill, my HR plummeted to the low 170s and stayed there for the rest of the race.

I kept repeating to myself lactate threshold effort, and no harder.  Lactate threshold effort, and no harder.  This was especially challenging heading up the hills on the course.  After I passed a woman around mile 2 who was wearing a hot pink mylar skirt and a gymnast's unitard, there were only two women in front of me--both Impalas.  So, I stopped feeling guilty about running this as a workout and just settled in to my pace.  I  finally slowed my pace down by the 3rd mile and really got into a great groove which ended up corresponding to a HR of 171 bpm.  Even up the final hill in the last 1/2 mile, I slowed the pace to maintain LT effort and a 171 HR.  I was very pleased with my self control.  I crossed the line in 27:02, so an overall 6:00 pace for the 4.5 miles.  When I realized the pace I had maintained, I was especially pleased.

I still had 11.5 miles to get in, so I ran a couple of miles counterclockwise on the course to cheer on runners.  One of the Impalas' non-competitive relay teams was missing a runner, so the night before I signed up to run the 3rd leg for their team so they could still race, again disclosing that I would be running it slowly.  I got back to the starting line and waited for my teammate, whom I had never met, to come across the line and tap my hand.  I had gotten several different descriptions of her, but I wasn't convinced I'd be able to tell her apart from the many other Impalas out there running relays.  I was really concentrating on reading the runners' bib numbers as they crossed the finish when I heard the announcer say that Shannon Rowbury had just crossed the line for one of the teams.  What what?  I looked up and she ran right in front of me.  I have to admit I was a little star struck, but I didn't have time to talk to her or tell her how cool she is.  She probably hears that all the time anyway.

So, I finally found my teammate and took off for another loop around the lake.  I ran that loop at around 6:45 pace and then completed one final loop at just over 7:00 pace for 16 miles.  We had a nice little potluck spread in our team tent, and after each loop, I would go there to refuel on cookies and cake.  This was way better than taking gu.


So, our relay team took first place in the masters division for the race as well as the overall PAUSATF Grand Prix title for 2009!  It felt great to be a small part of that accomplishment.  Our fast open women's team won the relay in the women's division and our masters team came in second overall for women's relay teams.

After the race, I was eager to get home and download my Garmin data, and I was not disappointed by what I saw.  My HR had indeed been running high in the first mile of the race and leveled off at around 189 as we crested the hill.  It actually spiked up to 206, but that I believe was an anomaly.  As I said earlier, as soon as I hit the downhill in mile 2, my HR took a nose dive and remained in the low 170s.  I declared 193 to be my new MaxHR reading and sent word to my coach.  While my coach conceded by saying my MaxHR was tentatively set at 193* (and that * is important), she thinks that the HRM may have been malfunctioning.  It just doesn't seem right to me that it could malfunction so sincerely, though.  I want to believe that the adrenaline from the start of the race coupled with a lack of a warm up made my HR spike early before settling in.  But, it could also be that there wasn't enough sweat built up on the monitor sensors to allow it to function properly.

I like the 193 number because it corresponds nicely with the figure I believe to be my HR at LT effort based on my recent and past workouts.  The low 170s fits into the 88-92% of MaxHR range that Dr. Daniels declares the LT zone.  I was also very pleased that 6:00 pace felt so great for that distance.  The Run to Feed the Hungry 10k I ran as an LT effort workout just a few weeks ago on a much flatter course had me running 6:10 pace for LT effort and the same heart rate.  So, I felt like this race showed progress.  More than anything though, it was a fun day to hang out with my teammates, eat good food and compete.