'Tis but a flesh wound 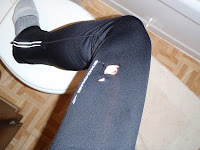 Last night, in the dark and rain, I was beginning my 4-mile evening run on a main street 1/4 mile from my house when a dog bit me.  I was on the sidewalk and saw a young lady running toward me with two dogs on short leashes.  As a dog owner, I appreciate it when people move over for me (though I typically move my dogs to the side when joggers/walkers approach) so I stepped into the bike lane to allow the trio to pass.  Just as I passed them, I felt a pinch on my left thigh and immediately looked down to see a hole in my tights.  I spun around and yelled to the woman, "your dog just bit me!"  She replied, "No, he didn't."  I then showed her the hole in my tights (from a good distance since I was now skittish about the dogs).  She said, "Oh, he just scratched you.  There's no way he would bite you.  He's not even my dog.  I'll pay for the tights."  I was dumbfounded.  I was expecting an apologetic response, and the defensiveness really threw me for a loop.  I really couldn't see a thing without any light and was getting drenched in the rain.  After trying to get her to recognize the obvious, I finally got so frustrated that I yelled something like, "way to take responsibility for your dog's bad behavior," and left to complete my run.  Now, I wish I had said something more profane.

I got to the nearest street lamp and looked at my wounds.  Two, perfectly spaced holes barely piercing the skin.  It appeared that the dog got more pant than he did leg, which was a relief.   The wound stung every time I took a step, but didn't seem very serious.  It hadn't even dawned on me to take down any information from this girl who didn't own the dogs, and of course this plagued me for the rest of my run.  Was it current on its rabies vaccination?  I couldn't remember seeing these two dogs in the neighborhood before.  How was I going to verify this information?  Could this dog have rabies?

When I got home, I took pictures for documentation and posted them on Facebook.  I started getting posts from runners with similar stories and was surprised at how common this is: not the dog bite part, but the refusal of the owner to accept responsibility.  One of those posts, from JT, came with some valuable information described in her blog.  She had been mauled by a dog a couple of years ago and didn't take the information of the owner either.  She ended up receiving post-exposure prophylaxis for rabies (a series of nasty shots) as a result.  I had no idea how deadly rabies is until I saw this article.  Here's the abstract:

Human infection with rabies causes a severe viral encephalitis that is almost uniformly fatal. Human exposure to rabies occurs primarily via bite wounds from an infected animal with injection of infected saliva beneath the skin. Following any potential exposure, the physician must evaluate the likelihood that an actual rabies exposure occurred based on degree of contact and likelihood that the animal was infected. Once exposure is confirmed, postexposure prophylaxis with immunoglobulin and human rabies vaccine must be initiated immediately. If no prophylaxis is given and rabies encephalitis develops, the only available therapy is supportive care, with progression to multiorgan failure and death in essentially all cases.

So, apparently, you don't mess around when it comes to rabies.  First thing this morning, I called my HMO's advice nurse.  She explained that the only thing she could offer was a one way ticket to the emergency room.  Just then, one of my colleagues popped out from behind a cubicle, having overheard my conversation, and emphasized the importance of getting treatment started quickly.  His wife had been bitten by a potentially rabid raccoon last year and was told the treatment needed to start within hours of exposure.

I was now thoroughly freaked out and accepted that ER ticket.  Luckily, it was a slow day at the ER, and I was seen quickly.  Of course, the doctor had no idea what to do except to offer to treat the "wound" with antibiotic cream and a course of pills.  I told him I could manage the bruising and scratches myself, but that the reason I was there was concerning this small question of rabies exposure.  He had no idea what to do about rabies.   To his credit, he offered to call someone from "Infectious Diseases" for me.  Forty-five minutes later, he got through, and they said that there was no serious concern, based on his description of the incident, of rabies exposure.  I was current on my tetanus shot, luckily, so no shots were required.

I'm now taking antibiotics, just in case Doggie Do-wrong ate cat poop or a rotting corpse before he bit me.  My leg hurts to touch it, and I get a slight stabbing pain when I run, but I will live.  Now that the health threat is behind me, I am pissed off about the hole in those tights.  I really loved them!  I guess I could still wear them.  Maybe I'll sew on a fashionable little patch to cover the damage.  I think it will say, "bite me."
Posted by Jaymee at 5:48 PM