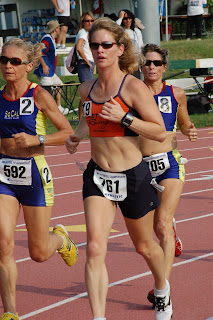 Summer is here, finally.  While we enjoyed a wonderfully cool spring, we all knew this was coming sooner or later.  The first few 100-degree days are a shock and leave you wondering how in the world you'll make it to October.  Then, one day, you find yourself remarking at how cool it is at 90F.

Despite running many of them in the heat, my workouts have been going well.  I'm in that unremarkable phase of training where I'm grinding out the intervals and switching from short, fast work to longer, tempo intervals and back again.  Last Thursday night, I tried out my new track spikes for the first time.  I got a late start on my evening run because I wanted to watch the live webcast of the men's and women's National Championship 10000m races.  I'm glad I did. Watching Galen Rupp and Amy Begley spank the field, even though they were running "pedestrian paces" for most of the race, gave my workout a little extra sparkle.  I love that.  Their pedestrian paces are faster than my goal 1500m pace.

I made it out to the track barely before dark and laced up my spikes.  I was not at all impressed with how they felt on my feet.  It felt like the spikes weren't digging into the track surface.  It had been so long since I'd worn a pair, I couldn't remember if this was normal or not.  Nonetheless, I cranked out my 8 x 200s with ease running each around 37 and spent the last rep thinking about my running heroes as I clocked a 34 second 200.  The bottoms of my feet were sort of burning when I put my trainers back on, but my feet appear to be no worse for wear.

When I first saw my workout, I was thinking I would run the 1500m balls out as a barometer of my fitness.  As I thought about it more, it seemed less likely that this was what my coach had intended. So, I asked her about her expectations for the time trial in particular and, frankly, to see why I was running 4+ miles at half marathon pace before my time trial.  She explained that the stamina running preceding the time trial would prime my body for the faster running and would introduce a novel stimulus of running fast when fatigued which will make me faster in the future.  I was to run the 1500 to get a feel for the distance on the track and to better understand my strengths and weaknesses at that distance.  I was not supposed to run the 1500m at 100% effort.  She suggested I run 80-second quarters and see how that felt.  Coincidentally, this was the pace that Hover K needed to run her 1200m time trial, so we were in there like swimwear.

Grody sidebar:  for the last 2-3 weeks, I have been plagued with a nasty case of bloat/stomach queasiness that makes it tough for me to eat and be comfortable at the same time.  It's particularly bad when I first wake up in the morning, especially when I have eaten dinner later in the evening.  When I wake up, I feel equal parts queasy and stay-puff bloated.  These symptoms get worse if I eat anything.  So, I don't.  This is a problem and catches up with me very quickly during my runs as I deplete my glycogen stores.

I had this problem this morning, but I decided to go ahead and give it a whirl anyway.  Hover K was counting on me after all.  This is the beauty of having training partners!  I jogged to the track and did a few slow laps around the track.  I decided I would run 92-94 second 400s for my half marathon effort and see how that felt.  Knowing I had a time trial following my 25 minutes of stamina work kept me slow.  I cranked out the 16 laps at 6:13 pace and was feeling fatigued: mission accomplished.  I then jogged for 10 minutes.  Hover K arrived while I was finishing my stamina running and we laced up our track spikes together in eager anticipation of our looming time trial (cue dramatic music).

We decided she should lead for the 1200m at her pace, and then I would finish the last 300m on my own.  She paced a great 1200m finishing up right at 4:00.  I kept that pace through the 1500m mark for a total time of 5:00.  I felt in control the whole way and didn't experience any rigor mortis in my legs even in the last 100m.  We then jogged a bit more and cranked out the 300m repeats.  Those were tough after all of this work and with my glycogen stores hovering on empty.  But, we did it together and got through it.

I spent the entire day feeling nearly drunk while I tried to replenish my glycogen stores.  That is a miserable feeling.  I finally got my mojo back after eating two burritos before band practice and was then able to run another 3.5 miles tonight after it cooled down.

My workout today was perfect for me and reminded me of how great my coach is, who incidentally crushed the masters record on the Mt. Washington course last weekend and made the National Mountain Racing Team headed to Slovenia this fall.  I can't possibly complain about hills when I read about that race: 12% average grade for 7.8 miles.  No thank you.  Anyway, my coach knows what I need to get to the next level and reminded me that it's not necessarily more of the same of what's gotten me to my current level.  The workout she gave me today gave me a huge boost of confidence for my upcoming shorter races.  To feel so at ease over 1500m at a fairly fast pace while fatigued made me realize that I am getting faster and have a good shot at meeting my racing goals in the mile and 1500m races.

Things are heating up in Sack-o-tomatoes!
Posted by Jaymee at 11:11 PM