Stars of track and field, you are 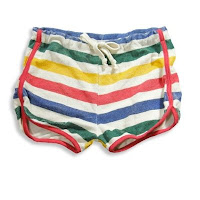 Last night, running around the practice track at CSU Sacramento, I felt like a track star.  While I left my terry underwear at home, I felt the city air run past my body.  This will make no sense to those of you unfamiliar with this Belle and Sebastian song.  The song runs through my brain as I circle the track.  It's very soothing.

While I did wake up Tuesday morning as promised in my last post, it was neither bright nor early.  My alarm went off at 5:30 and I noticed that it was 50 degrees out according to my iPad (cradled lovingly in my arms).  The forecast was for the low 80s in the evening, so my decision was easy.  Alarm off.  Sleep longer.  Run at night.

The 70 or so biking miles I've clocked in the last 6 days riding Pinky all around the city and to and from work made my legs feel like stumps as I set out for my warm up.  As soon as I got to the track, I engaged in a set of Antelope Explosion drills and my Pinky legs felt much better.

I typically program my workouts into my Garmin so I don't have to think.  It keeps track of my laps and paces leaving me free to sing Belle and Sebastian songs to myself during the workout.  This process doesn't work so well on the track, so my Garmin becomes a stopwatch.  Right out of the chute, I forgot to hit the lap button after my first rest, so I had to remember to add a lap to the lap counter as I continued this workout.  For some reason, in my head I was counting each "set" of 200s as a repeat rather than each 200m repeat for the first few repeats.  I got up to 5 "sets" and thought, "okay, that's a quarter of the way through the workout and I'm feeling pretty good."  I realized after a couple more reps that I was actually half way through.  I'm glad I caught that early, or it could have easily turned into a 40 x 200m super-szied workout.

I thought I was counting carefully after that, but I still managed to bungle the total number of reps somehow.  I got to what I thought was the end, and the number of laps in my Garmin showed 36.  I knew that it should be closer to 40, even with the missed lap at the beginning.  I tried to do the math in my head, but couldn't.  So, I stopped, reset my Garmin and viewed my history file.  Sure enough, I had completed 19, not 20.  For the life of me, I can't explain why I decided that meant I needed to do three more 200s.  I guess I was track workout stupid by that point.  So, my total workout was 22 x 200.

Enough of that nonsense.   How did it go?  As I said up front, I felt like a track star.  The repeats felt effortless.  I normally wear my heavy trainers on the track, but I decided to be a bit risqué and wear my Lunaracers instead.  Light as a feather.  I have not started training in my new track spikes, but I will ease my feet into them soon.  I've worn them before for longer races on the track, so I know that I will be fine in them.

Each of my splits was faster than goal pace, and I got faster toward the end of the workout.  My splits were:

These short repeats feel so different from the long slogging I normally do.  I can't wait for my next track workout on Saturday.  I have 5 x 1000m @ 5k effort on tap as part of my long run.  Bring it!