I will save those of you looking for a quick summary of my first post-injury racing experience some time and report up front that I did set a new personal best yesterday at the Marin Memorial Day 10k race, running 37:17 (6:00 pace).  I placed third in my VERY competitive age group behind two of my speedy Impala teammates and 10th overall female.  All in all, I am happy with the results.  For those interested in the deets, please read on.
Yesterday’s race was exactly the race I needed at this point in time though it was not without its challenges.  I ran fast enough to be pleased with my performance, but not so fast as to injure myself or feel overly exhausted.  More than anything else, the experience gave me a positive counter to the disastrous cross country race I had back in February and renewed my faith in my racing mojo.

I'm not known for being a particularly punctual person and typically find myself rushing around like a crazy woman before a race.  Consequently, I never seem to give myself enough time for a proper warm up.  After I registered for the race, I had just enough time to wait in the long potty line and do a short warm up of a few strides while en route to the starting line.  I'm sure a 1-2 mile warm up would have served me well, but I had to settle for about 800m instead.


The start was super crowded and didn’t thin out for at least 1/4 mile.  My pace was slow for this section as I tried to avoid stepping on runners‘ heels and elbowing them in the face as we all fought for air space.  This pace was fine with me, because I really wanted to make sure I didn’t go out too hot for the first couple of miles.  A few minutes into the race, it felt like a huge rock had lodged itself under the sole of my left shoe.  I knew that my Lunaracers didn’t have grooves in the sole that would pick up a rock, so I suspect it was a tootsie pop or piece of hard candy stuck to the bottom of my shoe.  It was really starting to irritate my foot after a few minutes and a wave of panic set in as I flashed back to my cross country shoe debacle and subsequent injury.  I tried to shuffle my feet a little and almost tripped myself.  I thought briefly about stopping to scrape it off, but knew I would lose my rhythm.  Luckily, a few stomp*stomp*stomps later, I freed the Jolly Rancher and went on my merry way.
I then experienced an unfortunate technological challenge.  A couple of weeks ago, the wrist strap on my Garmin broke after a run.  Luckily, I had purchased it at REI and was able to simply take it back to them for a brand new replacement unit.  I am normally not an auto-lap kind of runner, but the Garmin comes pre-programmed for this functionality.  I had been too lazy to change the setting.   Just before the one-mile marker in this race, I heard a “bleep bleep!” coming from my wrist and suddenly realized that I was auto-lapping where my GPS thought the mile markers were.  Damn it!  At each subsequent mile marker, the unit lapped farther and farther away from the marker on the road.
My pacing suffered as a result of not being able to get good mile splits.  Without them, I was forced to follow the pace reading on my GPS to reveal how fast I was going.  I do effort-based running, but, as I’ve recently reported, my 10k through half marathon effort workouts have equated to paces that are within seconds of each other.  My GPS showed that I was going much faster than I had planned.  In the end, it said that I ran 6.35 miles at an average 5:54 pace.
I knew that I was running slower than my GPS indicated, but I didn’t know by how much.  I ended up slowing my pace in response to this feedback because I was too worried about crashing at the end of the race, particularly when my GPS unit showed me running 5:48 pace for the 3rd mile!   I couldn’t convince my brain that I wasn’t really running that fast.
I think my biggest mistake of the race was a decision in the 5th mile to pace off of another runner for a bit.  It seemed like I had a pack of guys hanging on my butt for most of this race, and I wanted to take a break from leading the pack for a spell.  After about 1/4 mile of this I looked down to see my average pace had slowed from 5:55 to 6:10 for that mile.  I immediately sped up, but this was still the slowest of the day.  I think the best indication that I hadn’t run to my potential in this race was that, according to my trusty GPS, I ran the last 1/2 mile at 5:33 pace.
As I said up front, I am happy with this, my first post-injury race.  I had low expectations going into it having been back to running for less than 2 months and hard training for only 5 weeks.  Knowing that I can comfortably hold 6:00 pace for 6+ miles is a big deal to me right now.  Best of all, I ran in my racing flats and didn’t experience any pain before, during or after the race (except maybe a little Jolly Rancher discomfort).  In fact, I have no post-race soreness or fatigue at all!
I am taking this week to recover, but I will race again this Saturday.  Originally, I had planned to do a mile road race this weekend, but traveling ~200 miles to run 1 mile just seems wrong to me.  Instead, I’ve registered for a local all women’s 5k.  My performance in the 10k predicts just under 18:00 for the 5k, and I will try for that.  My current 5k PR is 17:55 (throwing out the 17:33 Race for the Arts 5J time from last August), so maybe I’ll see a twofer PR this week.  Wouldn’t that be something? 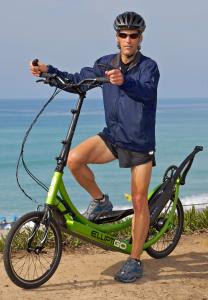 I almost forgot... I met Dean Karnazes after the race showing off his ElliptiGo bike.  I introduced myself to him, and he put out his hand and said, "Hi Jaymee, I'm Dean Karnazes."  I told him I already knew that, and he sort of smiled and kicked the dirt a little.  I'm not quite sure I got the gist of the sales pitch he was making for the bike, but he seemed to indicate that his training has changed as a result.  Instead of doing a hard run followed by an easy day of running, he's now able to do consecutive hard workouts by adding in the ElliptiGO as the second workout.  I'm not sure that this is sustainable given the fact that the body needs to recover after consecutive workouts regardless of whether  there's impact, but hey, he's Dean Karnazes, Ultramarathon Man.
Posted by Jaymee at 6:48 PM