I hated running until I was 36 years old and avoided it like The Plague. Early in my blogology, I wrote about this aversion and mentioned that the Air Force 1.5 mile run fitness test was one of the primary sources of my hatred. Today, I performed the 1.5 mile fitness test for maybe the 20th time in my life and actually set a lifetime PR. As I was circling (more like moving in a quasi-rhomboid fashion) around the “track” this morning, I recalled the first time I had done this test when I was an 18-year-old cadet in ROTC at the University of Puget Sound. I think I clocked 11:30 for the distance back then and was considered “fast” for a girl. I’m not sure that I ever got much faster than that until I started enjoying running 18 years later.

Every year, I have to do a military fitness test in addition to my physical exam to basically prove that I am breathing and ambulatory. It is actually nice to see the Air Force requiring Airmen to do PT three days a week and giving them time to do it. My Squadron forms up every week on Mondays, Wednesdays and Fridays for PT. On Wednesday, fitness tests are done for people who are due. I have usually scheduled this test at my convenience, but this time I wanted to do it with the group. I was really looking for a rabbit for the run since time trials on that track are ridiculous. 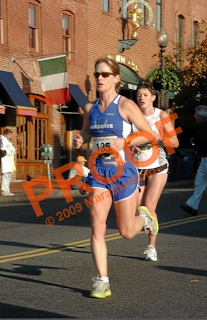 Since I normally do this on my own, the person that administers the test never makes me wear the AF PT uniform. I don’t actually own one and was really hoping I wouldn’t need it before I retired. Running with the Squadron presented a fashion conundrum for me as everyone else would be in their uniforms. I decided that I would designate and wear an alternate PT uniform—the shimmel and shorts issued to me by the AF for the Marine Corps Marathon last year. Since it was issued to me, I decided it was fine to wear. It is much more practical to run in than the rather bulky and scratchy AF PT uniform, and it comes in a fabulous cornflower blue color! Needless to say, I stood out like a sore thumb and slightly regretted my fashion choice when the Squadron Commander showed up for PT and looked askance at me. Call the fashion police!

A female, aged 40-44, needs to meet the following standards to max out the points on the AF fitness test (simply passing requires much less effort):

You start with the pushups and sit ups, and if you want to do well on the run, you just do the number that gets you the max points. That’s what I did today: 20 push-ups and 38 crunches. We then had our waists measured. The girls were escorted into the locker room for this procedure since female belly exposure is not authorized on a military base. Only two females were taking the test today: me and my 19-year-old crunch/pushup buddy. She and the measurer stood around and admired her massive belly tattoo and talked about how much it hurt while I was instructed to hold my buddy’s shirt up to aid in measurement. That was more than I wanted to know or see.

As we headed out to the track, I sized up the competition for the run, and it looked like there might be a couple of 19-year-old boys that could give me a run for my money. As we approached the track, I started having flashbacks of the SF Half Marathon—people were running around pell-mell, breaking into full-on sprints followed by near collapse. Then, there was the group that would jog a lap then stand on the side of the track and drop for dozens of push-ups or crunches—right there on the track. Of course some were happily jogging around the track in an orderly fashion. I estimate about 100 soldiers were using this 3/8 mile track for one purpose or another as we got ready to run fast. We had to wait for several minutes for the inside lane of the track to clear enough for us to take off. Without any warm up (aside from pushups and crunches), I blasted off the line followed by, well, nobody. I misjudged the competition and realized I was in for a time trial.

Little did I know, everyone in my Squadron was watching this cornflower-blue and white-compression-sock-outfitted runner “tear up the track”. I guess I looked like I was going fast compared to the hobby joggers running their 10-minute miles. I had to take it somewhat easy because I was doing another 12.5 miles after the time trial. I felt fine at 5:40 pace and just held that as I cut the tangents, swerved around joggers and leapt over prone soldiers. My time was 8:37. I have long wanted to break the 9-minute mark at that distance and did it easily today. My time was 38 seconds faster than last year (my previous PR).

After I finished, I jogged a recovery lap and headed back to get my paperwork signed off. The belly measurer asked if I was on the Air Force running team or if I just bought my cool outfit somewhere. I told her I was on The Team. I don’t think she was impressed. She just wanted to get a shimmel like mine. The deflated boys were all talking about how they really wanted to run fast, but they were served chicken fried steak at the Chow Hall last night and that really weighed them down. I’m sure that made a big difference.

I headed back into the gym for the next part of my workout—the dreaded 45 minutes up a hill. I used a different treadmill today than I did for last week's hill workout, but the gym was still as hot and humid as ever. My legs were barking loudly at me at the start of the hills so I took it a little easy, leaving the incline at 4% and the speed between 7.8-8.0 mph. I am a slacker, I know. I was absolutely drenched and seriously dehydrated by the end of the hill run despite my attempts to rehydrate. I finished up the 14 miles with some laps around the duck pond and a few cut downs on the track.

Apparently, I made an impression on the troops out on the track this morning. One of my co-workers told me later that she happened to overhear some of the women in the locker room talking about me. They were saying, “Did you see that Reserve Major flying around the track out there? I hear she lapped all the boys. She’s on the Air Force Team, you know.” Mission accomplished.