Excuses don't make you any faster... 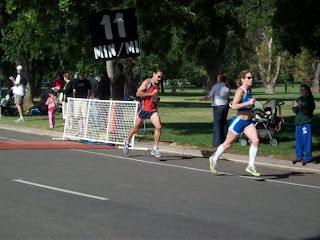 ...but they sure make you feel better some days.  I ran the aptly named No Excuses 5k here in Sacramento this morning but only after throwing out and eventually shooting down every possible excuse I could find not to run it.

The rest of my training week went as well as could be expected after the hillfest I had on Tuesday. As predicted, my legs were certainly a lot more sore on Thursday than on Wednesday.  On Wednesday, I had to decide whether or not to do my scheduled strength exercises.  When it's difficult to even walk, you have to wonder whether it's smart to bring on one legged squats, step ups and squat thrusts.  I did it anyway (as well as on Saturday), letting out a little scream with every rep.

Thursday morning, it was difficult to waddle out of bed and out the door for another quality workout.  This workout marked the beginning of sprint training for me.  Luckily, I had some girlie company for the sprints and they helped take my mind off of the quad sting. I had to go the 15-minute lactate threshold portion of the workout alone.  After eating humble pie two weeks ago in a lactate threshold workout where holding 6:07 pace for 25 minutes without stopping was impossible, I was curious about how I would hold up.  The main goal was to run the 15 minutes straight without stopping and I almost made it.  I stopped at the halfway point for a water break.  I held 6:09 pace for this one, so there was really not a lot of improvement over last weekend (where I held 6:11 pace non-stop for 15 minutes during my long run).  Given the state of my legs, I was okay with that.

This brings me to today's race.  I awoke at 0500 hours with the clunking of the sprinkler system and subsequent whining of my dog Sadie.  I then proceeded to lay in bed and ruminate on my options for this day.  My legs were still hurting slightly yesterday during my easy 5 miler, but strides felt okay.  I asked myself why I was running this race today recognizing that I would not run very fast.  In fact, my track record at this race was quite miserable.  I have always run a relatively fast marathon 3-5 weeks before running this race and have turned in subpar times.  Last year, after running a 2:55 PR at Eugene a few weeks before, I turned in a blistering 19:25 5k at No Excuses. Excuse #1--I ran a marathon a few weeks ago.

As I mulled this over, I realized the primary reason I was running the race today was to get another mark in the age-graded series that I'm enrolled in.  You can count 4 short (less than 8k) and 4 long (greater than 10k) races in the series.  I was 3rd female overall last year in this same series and did win some prize money.  The problem with doing this series is that many of these races conflict with my marathon training (or in this case, recovery).  So, I have found myself more than once compromising on a workout or trying to fit a workout within a race to try to maximize my age-graded performance. You might recall me doing this at the Nutrition Fuels Fitness 10k I blogged about last week.

So, there's excuse #2--I'm only doing this for the age-graded points and that's not a good enough reason.  At this point, I had convinced myself to abandon the race series and just do a workout today instead.  I used the following additional lines of rationale to make my case solid: Excuse #3-- I hate the feeling I get when I run a 5k; Excuse #4--I couldn't even hold 6:09 pace for 15 minutes last week without stopping so I'm certainly going to suck ass today.

I was happy with my decision to not run the race.  Within a few minutes, however, I felt a little guilty and started the list of reasons to run the race: 1) I had already paid for my entry, 2) I had to run today anyway, 3) I wanted to watch my friends race, 4) I didn't want to wonder what I could have run had I gone out to the race.  That last one was the clincher.  So, I decided that I would compromise and do my workout within the race.  Why not?  Dissin' Genius (MF's rave name) helped me come to this conclusion.  I think he had fun watching me throw these excuses (with F-bombs attached) all around the room for about an hour before finally coming to this compromise.

I felt gnarly in the warm up, but that is definitely par for the course.  It doesn't seem to phase me anymore.  I like to formulate my race goals during my warm up and always have various layers of goals.  I'll have a realistic goal, a definitely doable goal, and then a back up "in case I fall completely apart" goal.  Today's goals were now set: first, keep each mile as close to 6 minute pace as possible; second, do the whole race at a comfortable effort that left me only feeling slightly taxed at the end (this would be my measure of maintaining LT effort); and finally, beat last year's time (19:25).

I lined up a little behind the starting line because I didn't want to get sucked out too fast. About 300 meters into it I passed many of the 12-14 year olds that had gone out at 4:25 pace and were now heaving on the sides of the road.  By the first mile marker, I was at a surprising but comfortable pace (5:48) and more importantly an effort that I felt I could hold for the rest of the race.  I had a nice group to run with, which was great.  I loved running next to DA, a Fleet Feet racer, who had on the sweetest blue terry cloth head band I've seen in a long time (BTW, DA, you do know it's too late to jazzercise, right? http://www.youtube.com/watch?v=_kn7-wYzdZo).  He held a great pace, and we were able to work together the whole race.  Mile 2 was around 5:48 as well, but I think the mile marker was a little short.  I failed to hit my lap button at the 3 mile marker, but I know I slowed that third mile.  My Garmin showed me running a 5:58 pace for the last 1.11 miles of the race.

In the end I was glad that I had run this race.  I enjoyed watching everyone run their own races, competing against their competitors' statistically-calculated performances rather than the race clock.  Instead of the extreme confidence sinker I had predicted it would be, it helped me to see that I am on the road to recovery.  It also restored my confidence in my ability to run an adequate albeit not excuse-free race at the No Excuses 5k.  I guess the third year is a charm.