This is nothing like the NPR quiz show, but it is a game I play with myself.  I wake up every morning and weigh myself on my Tanita body fat measuring scale.  I talk myself through this procedure trying to assess whether I feel heavy or light and brace myself for the result.  I close one eye and peer through a slit in the other eye to see whether the number will come up on the light or heavy side. Lately, I've been disappointed in the result.

Today, I weighed in at a whopping 128.8 lbs. with ~12% body fat.  A runner will look at these stats for a 5'5" female and perhaps let out a little gasp.   To provide a graphical representation of this phenomenon, I have provided a hypothetical graph (below) of the weight distribution for 100 competitive female runners of my height.  As you can clearly see, I show up as an outlier giving the distribution curve a nice positive skew. 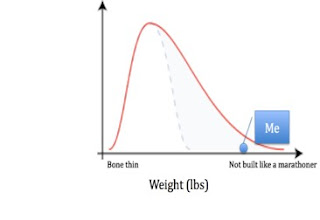 I sort of knew that I was a little bigger than most of my female competitors.  That is pretty obvious.  It was really when I first noticed that the average weight of the entire men’s elite field for any given marathon is lighter than me that I started to realize that my weight might be a factor I should consider as one component in my training to run a faster marathon.

Of course, one can't completely disregard the “Swiss” episode from the 2008 Eugene Marathon.  My Mom was at mile marker 18 or so when I came running up the bike trail hot on the tail of the lead female runner.  I would pass her while my Mom was watching and take the lead for a few short miles.  My Mom was looking for a place to vent her pride and found a gentleman that turned out to be a local running coach standing close by.  She told him I was her daughter at which point he glanced at my then 133-pound body and quickly responded that I sure wasn’t built like a marathoner.  My Mom replied without batting an eye, “Oh, right.  She’s just Swiss.”  Not sure what that means, but you get the picture.

So, approximately how much could I shave off of my marathon time by reducing the badonkadonk I’m carrying in my saddlebags?  According to the following web calculator (http://www.runningforfitness.org/calc/weighteffect.php), if I became no fitter than I was at CIM last December (where I ran 2:50:22 @ 128 lbs) I could run my goal of 2:46 (given similar conditions yada yada yada) by simply losing 4 pounds.  This equates to about 67 seconds for every pound lost over the marathon distance.

This is a big deal and you can probably see why runners are drawn to the fantasy world of weight loss as an “easy” way to become faster.   For a runner that is already in the teens on the BMI scale, this approach will most certainly lead to sickness and injury.  For someone like me, I doubt that anyone would look at the following statistics--5’5” 124 lbs--and think “bone thin”.

Before I became a runner, I rarely  thought about my weight.  I actually went through much of my 20s and early 30s thinking that I was immune to weight gain, happily able to *eat whatever I wanted* without gaining an ounce.  There's some magic point in mid-life where your brain continues to believe this myth while your body starts developing evidence to the contrary.  This came around age 36 for me and was one of the original reasons I started running--to shed some pounds.

Maybe I shouldn’t have been surprised to find out that the amount of attention paid to women who have gained a few extra fat nodules is equaled only by the gossip surrounding those deemed to be “too thin.” We are programmed at a very young age to look for our thinspiration in the world in the headlines plastered across every magazine stocked at the check out counter of the local grocery store.  If one of our kind dares to stray out of the tidy distribution of acceptable weight values, they are vilified in this week’s body image news.  Case in point:  “Tyra Banks Speaks Out About Her Weight: 161 lbs.—I still feel hot” is on the front cover of People this week.

The world of weight gossip is brutal among female runners. So and so was anorexic in utero and needs constant vigilance to ensure she doesn't relapse.  This other girl only eats crackers and kale garnish at restaurants and is therefore on the verge of an eating disorder.  Yet another always accepts chocolate cake at birthday parties, removes the icing completely and then eats only ¾ of it.  She is most definitely on the fast train to ana-mia-ville.   Ladies, these things do not go unnoticed!  I have seen this first hand and have to admit that I feel uncomfortable talking about my eating habits, weighing behaviors, etc. with some for fear of being labeled binge and purge worthy (though I guess this blog entry sort of makes employing a code-of-silence tactic impossible in the future).  I have to ask when did showing self-control when it comes to the food you eat become a sign of an imminent eating disorder?

In my next blog entry, I‘ll tell you how I lost 5 pounds last summer, why I think it had an impact on my running, how I gained some of it back and what I plan to do over the next few months to lose it.