From 1.5 miles to the marathon 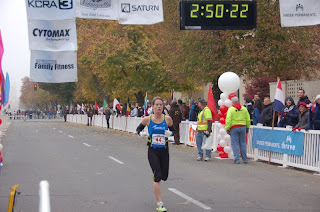 While the military 1.5 mile fitness test was responsible for scaring me away from running for over a decade, I find myself, ironically, spending this, my final year in the military spreading "friendship through sport" as a member of the US military marathon team.
Who knew that the military had a marathon team?
I won a spot on the team back in October 2008 when I competed in the US Military Marathon Championships held in conjunction with the Marine Corps Marathon in Washington D.C.  I placed second overall military female at MCM.  The top 4 get to compete for the US in the international competition which was held this year in Belgrade, Serbia.
I actually felt super fit going into Marine Corps but didn't handle the travel well.  Also, I was surprised at 2 a.m. the morning of the race with massive cramps and blood loss (sorry guys, I'm going to write about this stuff so just deal with it).  I ended up feeling like crap most of the race and had to settle for a relatively slow 2:57.  I was disappointed, but I realized at about the half way point in that race that this one was about the experience and not a PR.  So, I slowed down, but tried to focus on the competition to earn a spot on the US team headed for Serbia.
I was determined to prove to myself that I was in better shape than my time revealed and continued training through the next 5 weeks for the California International Marathon.  I took the week after MCM completely off and then ramped up my mileage and intensity treating MCM like a training run.  I also decided, since CIM was now a "throw away" race, that I would try out a bunch of different things: new taper, new pre-race and race day nutrition plans, new pacing plan--you name it, I changed it.  And it worked!
I ended up surprising just about everyone including myself with a 2:50 which included a 3+ minute negative split.  I also set a half marathon PR in the last half of the marathon and a 10k PR during the last 10k of the race.  I'm new to running, but I do recognize that this type of feat probably happens once in a lifetime.  So, I'm still savoring it.
With this crazy accomplishment under my belt, I took some serious rest over the holidays and started working with my coach on my training plan for my first international marathon in Belgrade, Serbia.
Posted by Jaymee at 8:28 PM