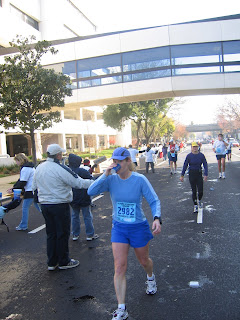 My current obsession with running can be blamed on my brother.  He enticed me to run my first 5k race in Portland, Oregon with promises of 80's bands at every mile marker and a live concert by Devo at the end of the race.  Cha.  Of course I'm going to go.  It was called the Nike Run Hit Wonder and it was fun, except for the running part.  I blazed through that 5k course in a speedy 25:54 and placed 17th in my age group.  I thought I was super fast and experienced my first runner's high.
Crazy pleased with myself, I found out that my brother was training for a 1/2 marathon that fall.  I told him he was insane wanting to run 13 miles in a row without stopping, but I was secretly intrigued!  He sent me his Hal Higdon half marathon training plan, and the gauntlet was thrown down.
I proceeded to follow this plan, increasing my weekly long runs one mile per week culminating in a single 10 miler the weekend before the race.  During this intense training program I realized a very interesting fact--the reason I hated running was because I had never run long enough.  I liked running long!
I ran my first half marathon, the Cowtown half marathon in Sacramento in October of 2004.  I had a great time and was able to run 1:44 without pain or injury.  So, I just decided to keep going since the California International Marathon was only a couple of months later.  Could I really run twice that distance?
My training schedule for that first CIM (I have run 4 more since) topped out at a weekly mileage of 26 miles.  I averaged 19 miles per week for the 12 weeks leading up to the race (having started at zero miles per week).  I ran 3:41 at CIM, qualified for Boston by a large margin and had a fantastic experience.  I walked through each water station, devoured gummi bears at the 20 mile aid station, laughed and slapped hands with spectators at mile 25--you get the picture.  I finished the race and proclaimed to my friend as I crossed the line, "that wasn't that hard."  That was the day I became a marathoner.
Posted by Jaymee at 7:58 PM