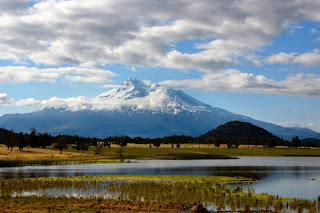 I have a really cool job.  I get to visit some of the most interesting and strikingly beautiful places in the country.  These places harbor some of the rarest species on the planet and my job is to help figure out how to protect them from imminent destruction.  You’ll be happy to know that most times we succeed in this effort.  If we were losing battles left and right, I’m pretty sure my job would not be as cool.

This week I was called upon to tend to some important science matters on a property The Nature Conservancy just purchased near Mt. Shasta.  As you can see from the picture, it has a lovely view of the mountain.  It also has critical coldwater springs that are key to the survival of some highly threatened salmon runs.

Originally, I had planned to do this week’s killer hill run, scheduled for Tuesday, on the treadmill when I returned on Wednesday since it’s impossible to find a convenient 30-minute uphill climb here in the Valley.  I keep telling my coach this in hopes that hill workouts will mercifully disappear from my routine.  Does she not get that you can see the immense flatness of the Great Central Valley from space?  She lives in Montana and is a National Mountain Running Champion.  I think the hill workouts are here to stay.

With this new wrinkle thrown into my schedule for the week, I started researching hill options out of Mt. Shasta City.  Of course there were plenty of roads leading straight uphill there, and I was excited about the prospect of actually doing this workout outside breathing in the beautiful mountain air.  When I arrived at our TNC office in Mt. Shasta, I consulted one of my colleagues who lives in town, is a runner and is very fit.   I asked about my hill options, and she told me that the one I was looking at would be a great option.  She said it was a Forest Service Road that had a nice, gradual, but consistent grade.  It was paved, but had no traffic.  It sounded absolutely ideal.

We took a tour of the new property on Monday afternoon.  It was a beautiful hike.  Well, it was fine until my poor choice in footwear created two nickel-sized blisters on the backs of both feet—OUCH!  The tour ended around 8:00 and I was famished having not eaten since noon.  I started flashing back to my hunger fest in Belgrade.  I got a big fat burger, garlic fries and downed two beers in record time at a local bar called the Billy Goat Tavern.  I took my happy, drunken self to my hotel room to try to rest up for an early-morning run.

I rolled out of bed and threw on my running clothes, GPS and shoes after gingerly covering my newly acquired blisters with band-aids.  I screamed a tiny scream every time I took a step.  I then strapped a water bottle pack around my hips. I never wear these torture devices, but I thought it might come in handy on this run.  Let me say that I have never found a water bottle and holder that fits my body aside from one I can carry in my hand.  I’m convinced that they just can’t make these for women.  The pack inevitably starts out in the right place, on my hips, and within a few shakity shakes, shimmies up my hips to become a hula-hoop around my waist.  If I cinch it at the waist, I find myself unable to breath. I ran back to my hotel after about 10 minutes and chucked the damn thing in my room.

I found my hill road after ditching my pack and started up the hill at lactate threshold (LT) effort.  The hill was mild at this point and I felt like a rock star.  I was doing 6:45-7:00 pace steady and having fun.  Then, I turned a corner and saw the real hill.  Wow.  I was facing about a consistent 7-8% grade.  I kept going and my pace slowed.  It then dawned on me as I was sucking wind in a major way that I was at altitude and was probably going to start suffering much worse as I climbed higher.

I surrendered after about 5 minutes into this climb, having gone out too fast.  Damn.  I really wanted to try to do this one without stopping.  I caught my breath for a few seconds, tried to forget that I had 25 more minutes of climbing ahead of me and took off again.  Like my LT effort run last week, I couldn’t seem to slow this one down enough so that I didn’t have to take a break.  The hill seemed to get steeper as I climbed and of course the air became thinner as I approached 5000 feet.  To my mountain goat friends, that doesn’t seem that high.  To a sea-level puke like me, it might as well have been Mount Everest.

As I got to around 20 minutes, I started negotiating with myself.  I knew that the workout as written called for 25-30 minutes and I thought about stopping at 25 to head back down the hill.  I propose such things to myself quite often while running, but I never take myself up on them.  I always max out my workouts whether it’s the number of reps, the mileage, or the pace.  No matter how painful it feels, I know that I will feel a lot worse shortening my workout than pushing through the discomfort and finishing the whole thing.  No excuses.  I actually came up with a mantra that I like to use:  excuses don’t make you faster.  Damn straight.

Each time I stopped, I thought I heard chipmunks mocking me.  I just flipped them off and kept chugging up the hill.  I finally got to 30 minutes and realized I had an “easy jog down” to deal with.  I have a long and rich history of trashing my quadriceps on down hills like this.  There was no way to avoid the fact that I would do damage.  How do you run down an 8% grade hill without trashing your legs?  I just went with it and enjoyed the ride.  I ended up climbing about 1800 feet for the whole 10+ mile run with 1300 of it in those 30 minutes over ~3.7 miles.

I was so preoccupied with the hills that I had forgotten what the rest of this workout was supposed to include.  So, I invented something.  I did 5 x 1 minute at 5k effort with 1 minute jog rests.  This was tough after the down hills, but I actually felt okay.  Then, I had a few cut downs to whip out and I was done.

Thinking back on the workout I am disappointed that I couldn’t pull the whole uphill off without stopping.  I do believe that the setting made the workout too tough to actually accomplish in one long run (unless I was half billy goat like my coach).  I am pleased with myself for sticking it out and doing the whole 30 minutes.  I could have easily completed the whole thing without stopping on a treadmill, but I wouldn’t have had nearly as interesting a story to tell, now would I?

DOMS (delayed onset muscle soreness) has set in today, but not nearly as badly as I expected.  My easy run this morning was not as painful as I would have predicted.  However, it’s always the second-day-post quad trashing that is the worst.  I‘m looking forward to another tough workout tomorrow on these hill-ravaged legs.  No excuses!